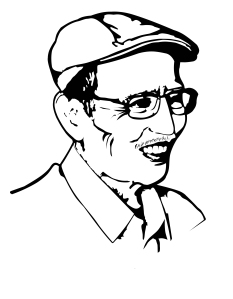 Attorney Romeo T. Capulong (1935-2012) was a powerful symbol of people’s lawyering, deeply cherished by his peers, and sincerely esteemed even by his adversaries

The Bagong Alyansang Makabayan (Bayan) is holding a tribute today (September 20) to honor the memory of the prominent, respected and treasured human rights lawyer Attorney Romeo T. Capulong. Ka Romy passed away last September 16 at the age of seventy-seven. In its official statement, Bayan described Ka Romy a human rights lawyer extraordinaire and a beloved champion of the masses who comes only once in a generation.

At the time of his death, Ka Romy was the chairperson of the Public Interest Law Center (PILC) which he founded in 1989 amid human rights atrocities under the then Cory Aquino administration. He was also the founding chairman and chairman emeritus of the National Union of Peoples’ Lawyers (NUPL), which was established in 2007 as a nationwide voluntary organization of law practitioners for the defense and promotion of human rights.

Ka Romy’s dedication to the poor and oppressed, combined with his extraordinary legal acumen, created a brand of people’s lawyering that was truly remarkable, if not unrivaled. While the country did not lack of brilliant lawyers who stood up against colonizers and tyrants, Ka Romy was special for his, as Bayan put it, “unshakeable faith in the masses”. Mula sa masa, para sa masa was Ka Romy’s guiding principle and foundation that motivated his exceptional life as a lawyer and a political activist.

A delegate to the 1970 Constitutional Convention (Con-con) and a former judge at the United Nations (UN) International Criminal Tribunal, Ka Romy challenged the myth of the blindfolded Lady Justice that metes out judgment objectively regardless of power and wealth. Indeed, for all his legal virtuosity, Ka Romy was always the first to say that the legal is just secondary to the political, as the reactionary justice system is skewed in favor of the rich and only the direct and collective political action of the oppressed and aggrieved can neutralize it. Such radical insight was borne by Ka Romy’s decades of battles inside the courtroom and by his keen understanding of the country’s political realities.

This was demonstrated in one of the last cases Ka Romy handled – the Morong 43. The controversial case ended in a historic victory for the unlawfully detained health workers through a determined and sustained political campaign, even as their counsels led by Ka Romy engaged the military and the Arroyo administration in almost a year of legal battle.

The Morong 43 was just one in a long list of high-profile cases that Ka Romy handled – from Prof. Joma Sison to Flor Contemplacion; from Ninoy Aquino to AFP General-turned-NPA Raymundo Jarque; from the Payatas tragedy to Hacienda Luisita; from the Erap impeachment to numerous labor disputes. He was also instrumental in the forging of landmark deals between the communist rebels and the Philippine government. All these illustrate, according to Bayan, “the character and caliber of Ka Romy and by themselves are indisputable testament to his legacy as a people’s lawyer, human rights defender, a Filipino patriot and champion of the masses”.

Ka Romy was to people’s lawyering what Ka Bel was to the militant labor movement and Ka Roger to the revolutionary armed struggle. Like Ka Bel and Ka Roger, Ka Romy was a powerful symbol of his chosen arena of struggle – inspiring many others to follow his lead; deeply cherished by his peers and supporters and sincerely esteemed even by his adversaries.  Like Ka Bel and Ka Roger, the death of Ka Romy has created a sense of national loss . This is a testament to his invaluable contribution to the still unfolding narrative of a nation seeking genuine freedom, democracy and justice.