In the past two decades, imported rice has been accounting for an increasing portion of our domestic consumption. Prior to the 1995 birth of the World Trade Organization (WTO), the country’s rice import dependency ratio (i.e., the extent of dependency on importation in relation to domestic consumption) only averaged 2.45% (1990 to 1994 average). In the latest available 10-year average (2006 to 2016), the ratio has risen by 4.5 times to 11.06 percent. In the immediate 10 years since the WTO (1995 to 2005), the average ratio was 11.24 percent.

Despite increasing dependence on cheaper imported rice, the retail price of rice has continued to rise. The average annual inflation rate for rice accelerated from 4% in 1996-2006 to 5.7% in 2006-2016. Apparently, more rice imports do not necessarily translate to lower retail prices. Yet, to tame rising rice prices and ease faster overall inflation, the Duterte administration’s answer is further liberalization of rice imports through the Rice Tariffication Bill(RTB). Already passed by the Houselast month, a Senate RTB counterpart is expected before the year ends.

The RTB will liberalize rice trade by removing the quantitative restriction (QR) on imported rice. This entails scrapping the current minimum access volume (MAV) which caps rice imports at 805,200 metric tons (MT) with a 35% in-quota (e.g. within MAV) tariff. Rice imports outside the MAV are slapped with a 40% tariff. In lieu of a QR, a general tariff will be imposed.

Rice tariffication and liberalization is a Philippine commitment to the WTO but repeatedly postponed in the past due to the socially sensitive nature of rice as an agricultural commodity. The Duterte administration used the soaring price of riceto justify finally replacing the rice QR with tariff, selling the idea that the entry of more imports will bring down local prices. As of the third week of August, well-milled rice retails at Php46.35 per kilo (10% higher than a year ago) and regular milled rice at Php42.85 (13% higher).

According to government’s economic managers, tariffication could reduce the priceof rice by as much as Php4.31 per kilo and lessen inflation by at least one percentage point. Rice production in Thailand and Vietnam, the country’s main sources of rice imports, is pegged at Php6 per kilo. In the Philippines, production cost is said to be double that amount.

While not a guarantee to lower prices in the long run, opening up the rice sector to unbridled imports leaves the country’s rice security at the mercy of an unpredictable and increasingly unreliable world market. This as 95% of Philippine rice imports come from just two countries whose own domestic production is either slowing down or declining. Globally, rice production has been steadily decelerating in the past four decades.

At the same time, the already precarious livelihoodof up to 20 million Filipinos who rely on the rice sector, including some 2.5 million rice farmers, gets more insecure than ever.

Other Southeast Asian countries that are also among the world’s major rice exporters (and potential Philippine suppliers) are experiencing production declines as well. Myanmar’s rice (paddy) production went down from an annual growth of 4.9% in the 2000s to a yearly contraction of 3.1% this decade. Cambodia is still posting a 3.8 growth since 2010, but it’s twice slower than its annual expansion of 7.4% last decade.

It is estimated that lifting the QR on rice will double the volume of the country’s rice imports in five years. For the already impoverished Filipino rice farmers, this means a sharp drop in income (some projections say by around 29%) as rice that are 100% cheaper to produce in Thailand and Vietnam due to heavy subsidies flood the domestic market.

Government allays fears of more bankruptcy among rice farmers through the proposed six-year Rice Competitiveness Enhancement Fund (Rice Fund) where all the duties collected from rice imports would be supposedly used to support small rice farmers. The central bank estimates an additional Php28 billion in annual revenues from rice tariffs that could be used to help prepare rice farmers for competition from imports through the Rice Fund.

But this was the same promise made to vegetable farmers and fisher folk most affected by WTO tariffication in 1995 with the Agricultural Competitiveness Enhance Fund (ACEF). Marred by corruption and mismanagement issues, the fund only ended up favoring agribusiness corporations as small farmers and fisher folk were further impoverished by massive agricultural imports.

In fact, since its introduction more than two decades ago, ACEF’s initial six-year life has been extended and reformed several times – the most recent in 2016, with implementation starting this year– because it has failed to achieve its stated objectives of protecting and preparing the farmers and fisher folk.

As mentioned, the influx of cheaper imported rice has not resulted to cheaper retail prices for consumers. The monopoly control that big private traders have over imported rice and those procured from local farmers allows them to keep retail prices high even as farmgate prices are depressed. Privatization and deregulation of its functions on palay procurement, rice importation, marketing and price control have made the National Food Authority (NFA) inutile in affecting prices. Inefficiency and corruption made the situation even worse.

Even as the price of rice continued to increase, the farmer’s share to retail prices is actually lower today. Prior to the WTO, farmer’s share to consumer peso (i.e. how much of the price paid by the consumers goes back to the rice farmers) decreased from 30.5% (1990 to 1994 average) to 28.3% in 1995 to 2005 and just slightly climbing up to 28.6% in 2006 to 2016. Note that the actual amount that goes to the rice farmers is much lower due to usury and landlessness that eat into their share in prices.

Liberalization harms both the consumers and rice farmers, and only the foreign and domestic private traders reap the benefits. Tariffication and the promotion of more imports give these private traders even greater control over the rice industry. ###

As usual, President Benigno S. Aquino III spent a big portion of his speech during his administration’s first anniversary rites yesterday blaming Mrs. Gloria Arroyo for the numerous problems facing the country. To be sure, the despised Arroyo administration has a lot to account for. But the people have long been waiting for actual charges to be filed against Gloria Arroyo for her corruption and human rights abuses. Sadly, after a year in office, all Aquino has done is whine while using Arroyo’s misdeeds to justify his own shortcomings. (Read the full text of his speech here)

The President, of course, also enumerated some accomplishments that his administration has supposedly achieved in the past year. One of the purported achievements Aquino highlighted is the improvement in the country’s rice security, to wit:

The Department of Agriculture (DA) has set a target of just 860,000 metric tons (MT) of rice imports this year from a record 2.45 million MT in 2010. According to the President, government is on track to meet its target based on first half figures. How did government achieve this? Again, quoting Aquino’s speech:

Aquino credited his agriculture program promoting the more efficient use of irrigation, use of better rice varieties, and expanded upland farming for the improvement in rice yield by 15% and a record harvest for the dry cropping season.

But the Bureau of Agricultural Statistics (BAS) has a different explanation behind the increased yield. Here’s a portion of their latest report Rice and Corn Situation Outlook, Vol. 25 No. 2, April 2011:

“The January-June 2011 palay production may reach 7.61 million MT, 14.9% higher than last year’s level of 6.62 million MT.  This could be attributed to the expansion in harvest area and improvement in yield compared to last year’s conditions when palay production was adversely affected by the El Niño phenomenon.  Area harvested may increase by 10.2% from last year’s record of 1.82 million hectares.  Yield per hectare may improve from 3.64 MT in 2010 to 3.80 MT this year.”  (Emphasis added)

Based on BAS’s report, the 15%-improvement in rice yield, which Aquino cited in his speech, can be attributed mainly to improved weather conditions. Palay production last year fell by more than 7% because of the drought. Thus, the supposed increase in yield is not really an expansion but merely a recovery from the 2009-2010-decline, pushed chiefly by favorable weather and not by any meaningful agricultural program. Yield per hectare, meanwhile, practically remained at its level before the 2010 El Niño, showing that productivity, which is a more reliable indicator of whether higher production is due to government intervention, did not really move. (See Table, lifted from the BAS report) 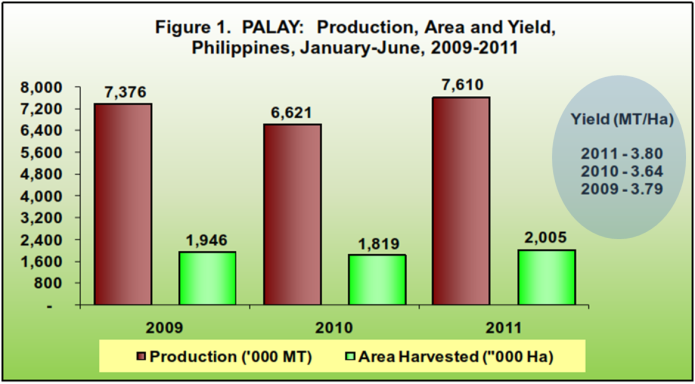 Moreover, the growth figures on rice production mentioned in Aquino’s speech – including the supposed all-time high harvest for the dry cropping season – are just based on projections and not on actual records.  In his most recent statement to the media (July 27), Agriculture Secretary Proceso Alcala said that, “Palay production in the first half of this year may reach 7.6 million metric tons” and that “this estimated output will put the government about halfway toward achieving its full-year target palay production of 17.46 million tons.” Alcala was quoting the BAS estimates cited in the April 2011 edition of the Rice and Corn Outlook.

Alcala’s confidence is hinged on the strong performance of rice production in the first quarter of the year when it reached 4.04 million MT or almost 16% higher than during the same period last year. For full-year 2011, the DA expects total production to reach 17.46 million MT, “barring any major weather disturbance.”

Lastly, the favorable rice supply in the first half of the year benefited as well from the over-importation of rice by the Arroyo administration in 2010. An audit team formed by the National Food Authority (NFA) disclosed that last year, there was an over-quantity of about 0.82 million MT in rice imports. This boosted the buffer supply of the NFA reducing the need for more importation.

Aquino’s first year speech was already very thin in substance particularly in terms of accomplishments. Worse, even the few achievements specified by the President like the rice supply situation seem highly dubious. (End)