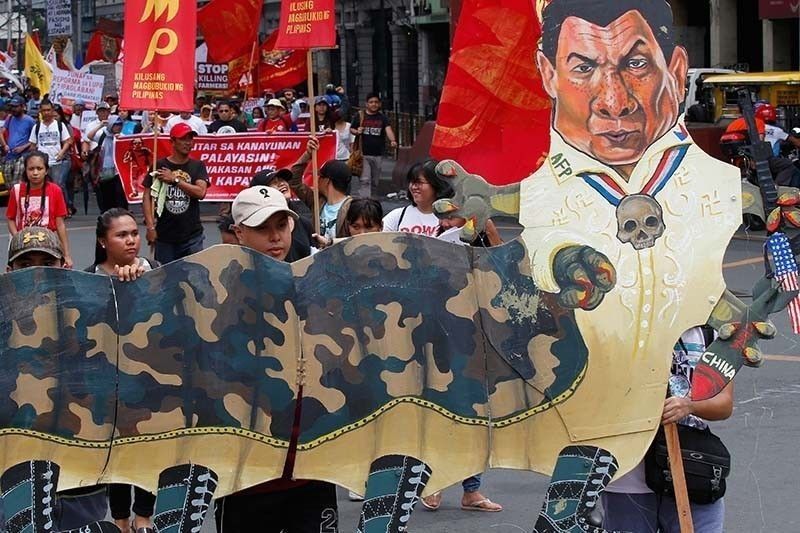 It’s “Red October” Day 1. Who or what is destabilizing the Duterte government today?

The oil companies. Oil firms announced that they will be implementing another round of oil price hikes starting Oct 1. Pilipinas Shell is hiking its LPG (liquefied petroleum gas) price by about Php2.36 per kilogram (kg) while Petron Corp. will also increase by Php2.35. These translate to an increase of almost Php26 for an 11-kg cylinder tank usually used by households. Including the previous increases since Pres. Duterte took over, LPG prices have already ballooned by an estimated Php216 to Php246. Further, starting Oct 2, oil firms will also implement a big-time price hike for diesel, gasoline and kerosene. Oil companies already announced that they will hike the price of diesel by Php1.35 per liter; gasoline, Php1.00; and kerosene, Php1.10. This will be the eighth straight week of unabated oil price hikes and would be the 28th overall for the year. Since Duterte became President, the price of diesel has already soared by more than Php20 per liter (Php13.50 this year alone) and gasoline by more than Php19 per liter (Php13.37 this year). (Read more on the latest oil price hikes here.)

The private water concessionaires of the MWSS (Metropolitan Waterworks and Sewerage System). Starting Oct 1, Maynilad Water Services Inc. will be billing its customers an additional Php0.90 per cubic meter for its basic charge under its rebased rates approved by the MWSS-Regulatory Office. This is on top of the Php0.11 per cubic meter increase due to the quarterly foreign currency differential adjustment (FCDA). Manila Water Corp.’s basic rates will likewise increase by Php1.46 per cubic meter due to rate rebasing while it will charge an extra Php0.02 per cubic meter due to the FCDA. Both rate rebasing and FCDA are mechanisms created under the privatization of MWSS that allow the private water concessionaires to adjust rates in order to pass on to the consumers all the costs of running the water services system and at the same time guarantee their profits. The rate hikes this “Red October” under the rate rebasing are just the first in four installments of increases with the three others to be implemented in Jan 2020, Jan 2021 and Jan 2022 – the second half of the Duterte presidency (that is if he is still in power).

Earlier, the Department of Economic Research of the Bangko Sentral ng Pilipinas (BSP) has estimated that inflation for September could reach 6.8%, with a range of 6.3% and as high as 7.1 percent. If the central bank’s forecast happens, this would be the ninth straight month of accelerated inflation and will be the highest in nine years. Pres. Duterte’s economic managers have repeatedly assured the public that inflation will ease in the latter part of 2018. But with the continued climb in oil prices, water rates, food prices (made worse by the impact of typhoon Ompong that destroyed almost Php27 billion worth of crops) and other basic goods and services, this appears to be a very optimistic forecast.

Rising prices and the inability or outright refusal of the Duterte administration to reverse current policies that allow unabated price hikes such as oil deregulation and water privatization, as well as its continued insistence on additional taxes under the TRAIN (Tax Reform for Acceleration and Inclusion) that further bloat prices are fueling social unrest and instability. The latest Pulse Asia survey showed that rising prices are the most urgent concern of Filipinos along with other economic concerns such as increasing workers’ pay, reducing poverty and creating more jobs.

As it hunts for “Red October”, the Duterte administration should look at itself instead, and not at the communists and their supposed co-plotters. Apparently, its own economic policies – together with its repressive schemes – are the ones destabilizing and isolating the regime. ###