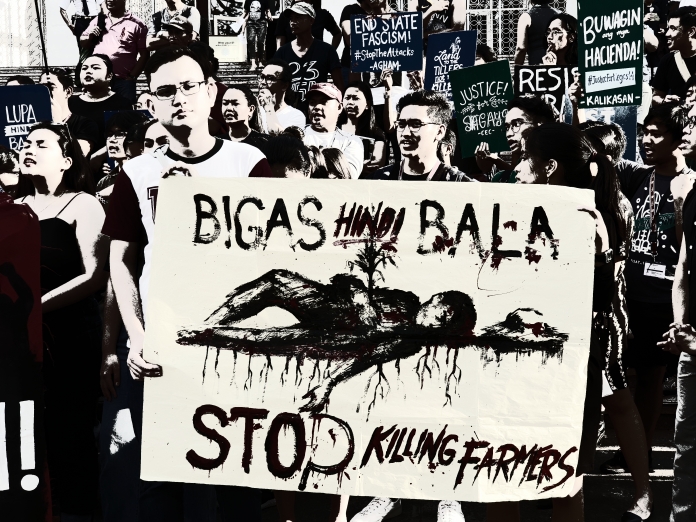 On Mar 30, 2019, the police and military killed 14 farmers in separate operations in the city of Canlaon and in the towns of Manjuyod and Sta. Catalina – all in Negros Oriental province. Twelve more were arrested. Police and military officials justified the killings and insisted that the victims were armed communist rebels. They claimed that state forces were just implementing search warrants for loose firearms when the victims opened fire at them.

But several witnesses, including relatives of the victims who survived the gruesome killings, have come forward to dispute the account of the police and military. The harrowing details of the massacre as told by the survivors and kin are being documented by human rights advocates and peasant groups as calls for justice and to end impunity mount.

The summary execution of 14 farmers in Negros Oriental came five months after unknown assailants massacred nine farmworkers in Sagay City in Negros Occidental on Oct 20, 2018. They were participating in a land occupation and cultivation campaign led by the National Federation of Sugar Workers (NFSW) at the disputed Hacienda Nene when they were killed. Weeks later, on Nov 7, 2018, their lawyer – a long-time peasant rights advocate in Negros – was also assassinated. For the military, the NFSW is a communist front.

It came three months after six people were killed and 15 arrested in similar joint police and military operations in search of supposed loose firearms in hinterland barangays in Negros Oriental on Dec 27, 2018. Again, the authorities insisted that the victims, including village officials, “turned out” to be armed communist rebels and fought back.

All in all under the Duterte administration, at least 55 farmers, farmworkers and land rights advocates have been felled by apparent extrajudicial killings in Negros island so far. These killings appear to be systemically being carried out as part of President Duterte’s anti-insurgency campaign, made even more reprehensible by his virulent rhetoric against assertive peasants (“My orders to the police and soldiers, shoot them… If they die, I do not care.” – Duterte on landless farmers involved in land occupation campaigns)

Negros island provinces are among those covered by Memorandum Order (MO) 32. It called for increased deployment of police and military forces purportedly to “suppress lawless violence and acts of terror”. The others are provinces in Samar island and Bicol region.

Implementation of the Malacañang directive in Negros island has taken the form of the Synchronized Enhanced Managing of Police Operations (SEMPO). More notoriously, it is also known as Oplan Sauron in Negros Oriental under whose name the recent mass killings and arrests of mostly Negrense peasants are being carried out.

Twenty of the reported 55 extrajudicial killings in Negros island were on account of Oplan Sauron in Negros Oriental. Oplan Sauron is sinister by design. Disguising as law enforcement, it uses search warrants for loose firearms to legitimize police and military attacks in rural communities and households suspected as bases of support of the New People’s Army (NPA).

But instead of weakening the NPA, such brutal modus operandi could be fueling even deeper collective resentment in the rural areas against the police and military. In the end, Oplan Sauron could only further boost the legitimacy of the people’s war and agrarian revolution that the NPA wages.

This is especially so because of the structural issues underlying the social unrest and conflict in Negros.

Negros is an island mired in grinding poverty and hunger, mainly spawned by decades of chronic landlessness among its farmers and farmworkers.

To be sure, the actual levels of poverty and hunger in the Negros island are much higher than what official data indicate considering the absurdly low thresholds government uses to measure them. Based on the 2015 official poverty survey, for instance, a Negrense only needs Php39 to Php44 to meet daily food needs; and a total of Php56 to Php63 to meet daily food and non-food needs.

Nonetheless, such low standards still paint a picture of widespread destitution, one that is even worsening. Poverty in both Negros Oriental and Negros Occidental deteriorated from a decade ago (i.e. 2006 data). Hunger also worsened in Negros Oriental during the same period. (See Table 1)

Many see government’s three-decade Comprehensive Agrarian Reform Program (CARP) as a failure; and it can’t be more conspicuous anywhere else than in Negros island. CARP is supposed to distribute 427,656 hectares (has.) of land in the Negros region. But as of end-2016, the program has distributed just 302,377 has. for a balance of 125,279 has. in land acquisition and distribution (LAD).

Negros island accounts for 21% of the national LAD balance of 602,306 has. – the largest among all regions. It has the second lowest LAD accomplishment rate at 71% , just behind the 67% of another restive and impoverished region, the ARMM. (See Table 2) 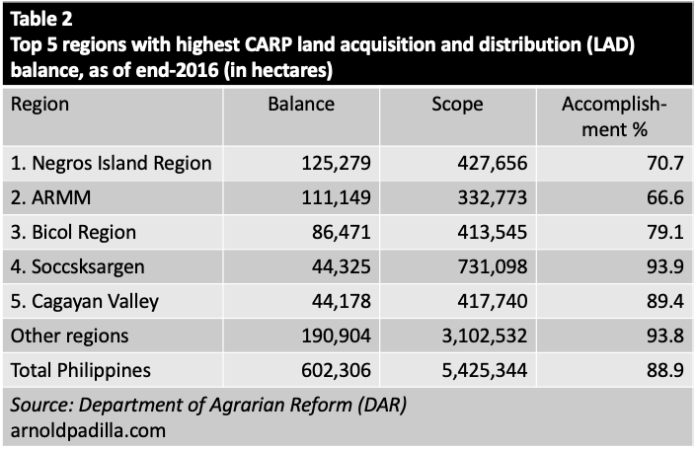 Meanwhile, a sizable portion of CARP lands in the region, particularly in Negros Occidental, is under the notorious stock distribution option (SDO) that allows landlords to retain effective control. SDO schemes cover more than 3,200 hectares of CARP lands in Negros Occidental as of June 2015 and practically all are planted to sugarcane, accounting for almost 90% of all SDO lands nationwide.

But the actual take home pay of the sugarcane farmworkers is much lower as they are tied to the vicious cycle of landlessness, starvation wages and debt. Paying off loans used to buy rice and other basic daily necessities in between pay days leaves sugarcane farmworkers and their families with practically nothing. In reality, a sugarcane farmworker typically earns just around Php50 to 67 a day, forcing them to work in several haciendas to augment their income.

Their dire situation is only made worse by the dreaded tiempo muerto or the period between the planting and harvesting seasons of sugarcane where no work is available in the haciendas for three months. With no established mechanism of government support, sugarcane farmworkers are left to fend for themselves, usually by taking on odd jobs in the cities.

But others take organized action such as the bungkalan campaign (land occupation and collective cultivation) on still undistributed CARP lands. However, landlords and even state forces respond to this legitimate form of assertion of people’s rights to land and livelihood with systematic violence like what happened in the “Sagay 9” massacre.

When government’s apparent plan to end landlessness is to eliminate the landless, what are the farmers and farmworkers of Negros island supposed to do? ###