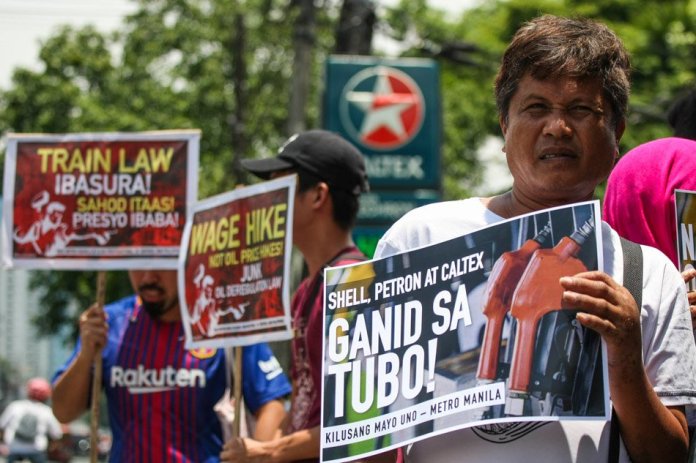 Suspending the imposition and collection of the 12% value-added tax (VAT) and the additional excise taxes under the TRAIN (Tax Reform for Acceleration and Inclusion) Law could immediately bring down the prices of oil products by more than Php8 to as much as Php10 per liter. This is urgent as oil prices continue to soar, and with inflation further accelerating to a fresh nine-year high at 6.7% in September.

While the Bangko Sentral ng Pilipinas (BSP) claims that inflation may have already peaked last month, projections such as that of the US-based Energy Information (EIA) peg even higher global oil prices in the fourth quarter of 2018 due to lingering supply concerns.

Removing oil taxes now is also justifiable and fair, considering that apparently in just nine months (Jan to Sep 2018) the government may have already almost equaled their full year 2017 collections from the VAT on diesel and gasoline, based on estimates. Total revenues from excise taxes on oil products in the first six months of the year, on the other hand, are 181% higher than what was collected during the same period last year according to an official Department of Finance (DOF) preliminary report. All these mean that government can afford to forego additional windfall oil tax revenues, if only to protect the public from further taking a hit from escalating cost of living.

Oil firms advised that starting Oct 9, the price of diesel will again go up by Php1.45 per liter; gasoline, Php1.00; and kerosene, Php1.35. These upward adjustments will bring the total increases for the year at Php14.95 per liter for diesel; Php14.37 for gasoline; and Php14.00 for kerosene. The latest increases are the ninth straight round of oil price hikes (OPH) in as many weeks, and the twenty-ninth for the year.

With the recent OPH, the common price of diesel in Metro Manila is now at almost fifty peso per liter (Php49.75) while gasoline (RON 95) is already the approaching sixty-two-peso mark (Php61.50). At these levels, oil prices are now at their highest in nominal terms in the past decade.

Suspending the oil VAT and excise taxes under the TRAIN Law should be doable for the government since doing so would no longer adversely impact its revenue generation from petroleum products. Economic managers projected international crude oil prices to be at just between US$45 to 60 per barrel and the foreign exchange (forex) rate at just Php48 to 51 per US dollar for 2018. Actual Dubai crude prices for the year, however, have ranged between US$60 to 80 per barrel while the forex rate is averaging Php52.48 per US dollar so far this year.

In other words, the Duterte administration has been collecting windfall revenues from the 12% VAT on oil products due to incessantly increasing prices as a result of higher than anticipated Dubai crude prices and a weaker peso. The DOF reported that overall VAT collections in the first semester of 2018 have reached Php179.95 billion, or about Php1.51 billion higher than what was raised during the same period last year.

While the DOF also said that VAT collections in the first half were 19% short of the government target for the period, this was not due to lower revenues raised from the oil VAT, which as mentioned have certainly skyrocketed due to higher pump prices. Apparently, small and medium enterprises (SMEs) and self-employed individuals that used to remit the VAT before the TRAIN Law became effective are now using other tax options under the new law. But that VAT collections in the first semester are still slightly higher than last year’s first half total is indicative of how much windfall the government has raised from rising oil prices.

That’s about Php73.06 billion in VAT revenues from diesel and gasoline. For comparison, at an average common price of Php32 per liter in 2017 for diesel and Php46 for gasoline, total VAT collections from the two oil products for full year 2017 may have reached an estimated Php76.21 billion.

These are, of course, just estimates and actual collection figures may differ, perhaps even widely. But there should be no significant disparity between the comparison of oil VAT revenues between 2017 and 2018, whether estimates or actual collection data. The point is that government can decide to stop collecting more oil taxes now to immediately ease the burden of the public, even simply based on the fact that they have already collected enough.

Meanwhile, excise taxes collected from all petroleum products reached Php18.03 billion in the first six months of 2018, or almost thrice of the excise taxes collected from oil products in the same period last year, according to initial DOF data. That should be more than enough given how inflation has rapidly accelerated this year with increasing oil prices under the TRAIN Law as one of the primary culprits.

The whole point of raising taxes is to send back the generated resources to the people in the form of key economic and social services as well as programs and projects that benefit them and the country. But if the taxes are so onerous especially for the poor such as the VAT and excise taxes on petroleum products, they become an unnecessary burden and are oppressive. They negate whatever supposed benefits the people expect to get from the government. For the government to insist on collecting such taxes is unacceptable.

Imagine, for instance, a jeepney driver or small fisher whose income has been substantially eroded by increasing diesel and gasoline prices. Public education or health services, even new roads and bridges funded by their taxes are meaningless amid high prices that deprive them of decent living. Then there is the question of whether these tax resources are actually used for public interest and welfare given how corruption remains rampant in the bureaucracy not to mention that many programs and projects funded by these resources are anti-poor by design.

On the contrary, removing the VAT and excise taxes on oil now will have an immediate favorable impact on household budgets. ### 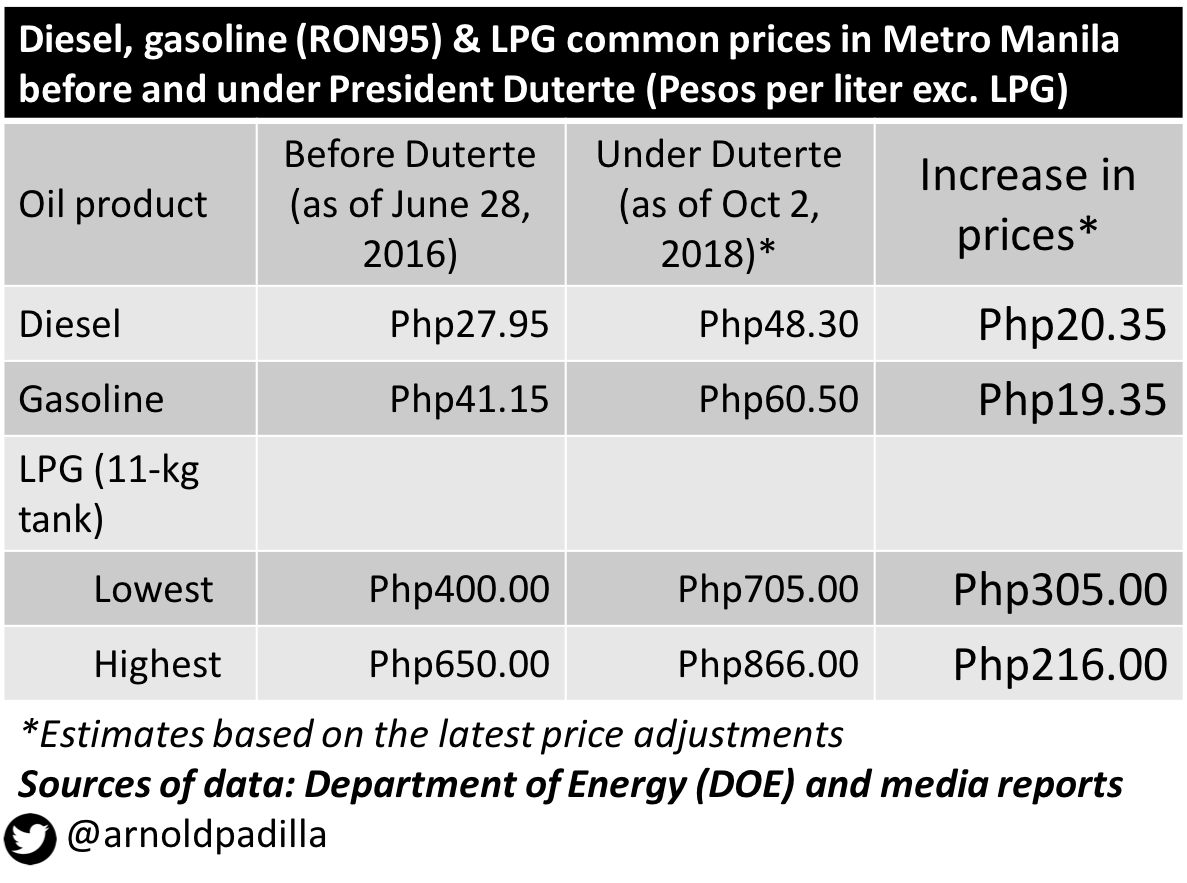 Today’s oil price hikes (OPH) bring the nominal prices of diesel and gasoline to their highest levels in a decade. Oil firms announced that they will increase the price of diesel by Php1.35 per liter today and gasoline by Php1.00.

On the other hand, the common price of gasoline (RON 95) in Metro Manila is now at Php60.50 per liter. The last time that the prevailing pump price of gasoline in the capital region breached the Php60-mark was on Jul 21, 2008 when unleaded gasoline was retailing at a range of Php59.20 to Php61.07 per liter.

The announced OPH today is the eighth straight in as many weeks and the 28th overall. Total price increases for the year is Php13.50 per liter for diesel and Php13.37 for gasoline. The increases include the impact of Pres. Duterte’s TRAIN (Tax Reform for Acceleration and Inclusion) Law that added Php2.80 per liter in the pump price of diesel and Php2.97 for gasoline.

Overall, since Pres. Duterte took over, the common price of diesel in Metro Manila has already ballooned by Php20.35 per liter and gasoline by Php19.35.

Taking advantage of automatic weekly price adjustments under the Oil Deregulation Law, oil firms also appear to be implementing much higher price changes than what global price movement and forex fluctuations supposedly warrant. This simple profiteering has allowed oil firms to pocket about Php1.41 per liter in additional profits from diesel, and around Php2.53 per liter from gasoline.

Meanwhile, liquefied petroleum gas (LPG), according to the Energy department, is also now retailing in Metro Manila at Php705 to Php866 per 11-kilogram (kg) cylinder tank after oil firms increased LPG prices again yesterday (the eighth time this year). Before Pres. Duterte took over, the price range was only Php400 to Php650. Put another way, the most expensive LPG before Duterte became President in 2016 is still much cheaper than the “cheapest” LPG under him today. ###