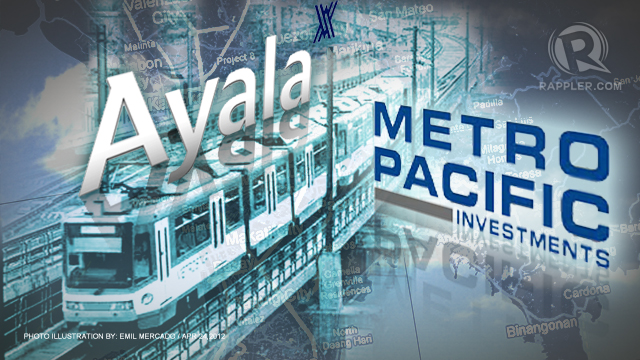 The LRT 1 privatization, cornered by the Ayala-MVP group, shows how the Aquino regime has favored the oligarchs at the people’s expense. Read more here (Image from Rappler)

One of the biggest legacies that President Benigno S. Aquino III will leave behind is how his regime has favored the rich and oppressed the poor.

Below are some numbers.

Five SONAs ago, President Aquino declared public-private partnership (PPP) as the key to many of the country’s needs. Ten PPP awarded projects worth Php168.9 billion later and one SONA left to give, how did Aquino’s centerpiece program fare? (An updated report – as of 22 July 2015 – from the PPP Center now pegs the total cost at Php189 billion, reflecting the Php20.1-billion adjustment in the cost of the Cavite-Laguna Expressway from Php35.4 billion to Php55.5 billion)

Aquino has been often criticized for the slow progress of his flagship infrastructure program. There are 15 more PPP projects under various stages of bidding with an indicative cost of Php549.4 billion. Measured against this, Aquino has only awarded 40% of the total number of projects identified. They are equivalent to less than a quarter of the overall indicative cost. Aquino, however, claims that with 10 awarded projects, his administration has already surpassed the six solicited PPP projects of the past three administrations.

Before he steps down, Aquino aims to award five more PPP items. The largest is the Php122.8-billion Laguna Lakeshore Expressway Dike. Like others in the PPP portfolio, the bid schedule for this mega-project has been moved by several months. As such, doubts persist on meeting the target of 15 awarded PPP projects.

But the number of contracts Aquino has sealed will not define his PPP legacy. His biggest contribution is the kind of PPP environment that his regime has began to build. Aquino made a three-decade old neoliberal scheme even more desirable to the local oligarchs and their foreign backers. He has paved the way for more and bigger privatization deals for his successor. Twenty-seven more projects in various stages of pre-bidding preparations are in the pipeline of the PPP Center.

The country, in fact, is recognized globally for its PPP program. UK-based Economist Intelligence Unit (EIU) recently named the Philippines as the “most improved country in Asia Pacific for PPP readiness”. Aquino’s reforms led to distinctions as “most-improved regulatory and institutional frameworks” and “improved investment climate and financial facilities”. Aquino made this possible through perks and guarantees unprecedented in the history of privatization in the Philippines.

Creating the most favorable climate for private investors has been one of the earliest and top concerns of Aquino. Less than a year into his term, economic managers started conducting consultations with business groups and foreign aid agencies on revising the Implementing Rules and Regulations (IRR) of the BOT Law.

Approved in October 2012, the revised IRR introduced new provisions that make the PPP program more palatable to private business. Chief of them are explicit provisions guaranteeing that PPP proponents will be able to collect the contractually agreed fees or charges that they can impose on the public, regardless of regulatory intervention that may affect (i.e. lower) such fees or charges.

This is contained both in the context of granting final approval of grant of the franchise by the regulator and of regulatory determination of tolls, fees, rentals and charges that the proponent can charge to the public. Such government guarantee is absent in the old 2006 IRR.

Back in November 2010 at the international PPP Summit that government organized, Aquino referred to this as “regulatory risk guarantee”. Before 200 foreign businessmen, Aquino said, “When government commits to allow investors to earn their return from user fees, it is important that that commitment be reliable and enforceable. And if private investors are impeded from collecting contractually agreed fees – by regulators, courts, or the legislature – then our government will use its own resources to ensure that they are kept whole.”

An example is the so-called Deficit Payment scheme in the Concession Agreement (CA) Aquino signed with the consortium of Ayala and Pangilinan for the Php64.9-billion LRT Line 1 Cavite Extension and Operation & Maintenance project. The LRT 1 Deficit Payment scheme states that government will shoulder the disparity between the Notional Fare, which the Ayala-Pangilinan group is entitled to impose under the CA, and the Approved Fare that the Light Rail Transit Authority (LRTA) may grant.

Aquino likewise issued Executive Order (EO) No. 78 in July 2012 that mandates the use of Alternative Dispute Resolution (ADR) in all PPP contracts. ADR provides for alternative avenues outside of court to settle disputes or conflicts, which may arise during the contract lifetime of a PPP project. ADR includes conciliation and negotiation, mediation and arbitration. ADR makes for a more inviting climate for investors. Costs are shared and investors have a say in the final decision. The process is also less tedious since watchful and assertive public interest groups are shut out unlike in regular judicial courts or public hearings.

The arbitration mechanism in the CA of the Metropolitan Waterworks and Sewerage System (MWSS) with the Ayala and Pangilinan-led concessionaires is a form of ADR. Under it, investors and regulators sit down in a panel to settle dispute away from any form of public scrutiny, much less participation. The LRT 1 PPP contract also contains a provision on ADR.

The worst of Aquino’s PPP reforms, however, are yet to come. As a “continuing legacy for the people”, Aquino seeks to pass the PPP Act that will amend the 26-year old BOT Law. Lobbying for the PPP Act are the Joint Foreign Chambers in the Philippines (JFC) and the Makati Business Club (MBC). The bill has already been approved by the House committee on public works and highways. It is currently pending at the appropriations panel which will discuss the bill’s funding provisions.

The PPP Act will disallow courts from issuing temporary restraining orders (TROs), preliminary injunctions and preliminary mandatory injunctions against practically all PPP-related acts. Court officials who will violate this would be expelled from the judiciary and face criminal and civil liabilities. While the Supreme Court (SC) can still issue a TRO, etc. against a PPP project, such order will only be effective for a maximum of six months.

Aside from weakening established judicial and regulatory processes that the public can resort to for protection, the PPP Act will also guarantee that public funds are available to protect the commercial interests of investors. It will ensure, for instance, that funds are accessible to finance government obligations arising from regulatory risk guarantees like LRT 1’s Deficit Payment Scheme through a Viability Gap Funding (VGF).

Moreover, the PPP Act will also institutionalize a Contingent Liabilities Fund (CLF) to be funded by foreign debt and local resources. Permanently appropriated, the CLF will ensure a steady source of public funds to meet government’s financial obligations arising from PPP contracts. Such obligations include performance undertaking where government guarantees payments for debts incurred by the private investor. One of the PPP projects that enjoy performance undertaking is the Php69.3-billion MRT 7 of presidential uncle Danding Cojuangco.

Remember the Ramos sweetheart deals with independent power producers (IPPs) that until today bleed the National Power Corporation (Napocor) dry? Those are also examples of PPP-related contingent liabilities. In 2011, the public debt arising from such liabilities still stood at US$16.73 billion despite a staggering debt servicing of US$18 billion since 2001.

Like his predecessors, Aquino justifies PPP because of limited public funds. But his proposed PPP Act will even further worsen government’s fiscal woes. Aside from the VGF and CLF, the PPP Act will likewise allow government to shoulder more than 50% of a project’s cost, lifting the cap under the current BOT Law. Perks like exemptions from local and real property taxes will be institutionalized as well for the big-ticket projects of the oligarchs like power plants, toll roads and mass transport.

Through his PPP program, Aquino has successfully built a legacy of completely surrendering public interest and the people’s sovereignty to profit-driven corporate agenda. His term will be remembered for making the Sy, Pangilinan, Cojuangco, Ayala business groups and the foreign interests behind them more powerful and richer than ever.
Meanwhile, commuters are forced to endure trains that break down every week and greatly risk their safety even as fares jumped big time. Consumers are forced to bear rising water rates amid questionable charges. Households are forced to cope with steep electricity bills, manipulated charges, and insecure power supply.