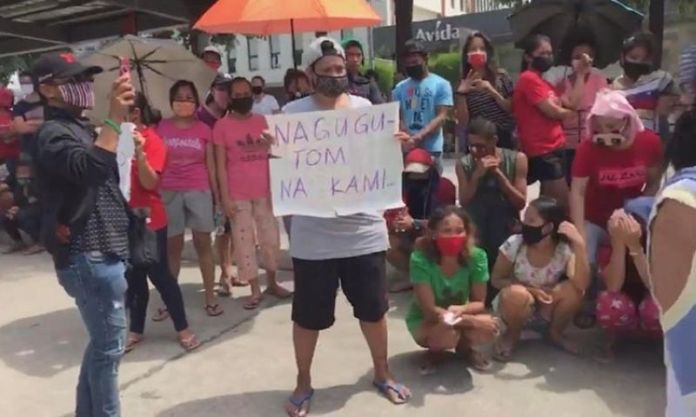 “WE’RE STARVING”. Residents of an urban poor community in Sitio San Roque in Quezon City trooped to EDSA on Apr. 1 amid strict lockdown rules due to COVID-19 to demand relief from government. (Photo: Yahoo! News)

President Duterte’s militarist response to the COVID-19 crisis took a turn for the worse on Tuesday, Apr. 1. In a televised address to the nation, he warned people seeking government relief amid the pandemic that he will “shoot them dead”. His unscheduled speech was apparently triggered by the protest of an urban poor community in Sitio San Roque demanding the government assistance promised to them when the capital region was put on enhanced community quarantine (ECQ).

Filipinos have been enduring Duterte’s mindless and violent rants for four years now. But his latest incendiary rhetoric of ordering his police and soldiers to kill without hesitation those who violate his authoritarian ECQ hits differently for most. Locked down, deprived of mobility and productive work, starved and grappling with fear and uncertainty so much as with the unfamiliar virus as with government’s overall response to contain it, the people are enraged.

Duterte, as he is wont to do every time the legitimacy of his leadership is challenged, framed his virulent tirade as a warning to the Left, whose only desire according to the long ailing Chief Executive is to destabilize his government. He thought that this would justify his violent diatribe because the Left is supposedly an enemy of the state.

But the public felt it was not just addressed to the Left; or more likely they have already identified with the legitimate demands of the Left from this regime. Whichever is the case, Duterte is picking a fight not just against the politically organized sections of society, but all the people harshly impacted by the COVID-19 pandemic and government’s tyrannical response to a public health crisis.

The erstwhile apolitical, be they public personalities or one’s family and friends, are speaking up over Twitter or dinner against Duterte’s heartless verbal onslaught and its real implications to people’s welfare, especially those who are vulnerable to more hunger and poverty. The ECQ may have prevented public gatherings, but it also gave people more time online to discuss, share and process their collective thoughts and sentiments against the regime. It gave families and neighborhoods more time together to agree as a group how insufferable and contemptible the President and his men have become.

The ECQ meant to isolate the people from each other because of COVID-19 is ironically bringing more and more together in the conviction that the current state of the nation is no longer acceptable and tolerable. The people are not afraid of you, Mr. President. They are increasingly finding strength and courage from each other.

Duterte and his Defense and military people who are behind and in charge of the lockdown wrongly thought that their dastardly agenda of repressing dissent and democratic rights under the pretext of political stability has been made easier by the COVID-19 pandemic. On the contrary, the crisis and the government measures to supposedly address it in fact have heightened the conditions for greater social unrest and conflict, and for people to organize and take collective political actions.

The existing and emerging material conditions for these are unmistakable. Duterte’s own economic managers are forecasting an economic contraction of as much as 0.6% and job losses of as high as 1.8 million (one million in Luzon alone) this year due to the pandemic. Total economic losses could reach as much as PHP 1.36 trillion, with Luzon accounting for more than one trillion These estimates assume that the ECQ will only last for a month.

As the crisis is global, the economy could not rely on foreign exchange, including remittances from overseas Filipinos and foreign trade, to boost domestic consumption. The world economy may already be in a recession that some economists say is comparable in severity to the 2008-2009 Great Recession. Or it can even be worse. The International Labor Organization (ILO), for instance, estimates that the COVID-19 pandemic could wipe out up to 24.7 million jobs worldwide. For comparison, the global financial and economic crisis 10 years ago claimed 22 million jobs.

The National Economic and Development Authority (NEDA) expects remittances to drop by as much as PHP 8.5 billion this year due to the crisis. Many Filipino families will face hardship in the coming months, even long after the lockdown has been lifted. They include not just the urban and rural poor, who are the most exposed to the impacts of pandemics and economic declines, but even those who used to have the means to spend more. The pressure will further increase for government to provide social and economic services, something that the COVID-19 crisis has shown the regime is incapable of.

There is a disease spreading in government that is plunging the nation into chaos and death. It is not caused by the novel coronavirus, but by the old, familiar virus of authoritarianism. To get rid of this virus and heal as one, the country truly needs a bayanihan – to determinedly and strongly work together as a people in building a government and a nation that is truly theirs. In this battle, all the oppressed are frontliners.