After a series of oil price cuts that started from mid-October 2018 up to the first week of the new year, domestic pump prices have begun to climb up again. The recent increases are due to the combined impact of rising global oil prices and of the second tranche of additional excise tax on oil products under the Tax Reform for Acceleration and Inclusion (TRAIN) Law.

For consumers, it is bad enough that they are made to shoulder a heavier tax burden from a commodity as vital as oil. It is even greater injustice that they are forced to pay for overpriced oil and for even bigger fuel taxes due to such overpricing.

As oil firms are wont to do in a deregulated regime, they implemented price adjustments in 2018 that were higher than what were justified (at least based on Department of Energy or DOE standards) by the weekly changes in global benchmark prices as well as foreign exchange rates.

For 2018, oil companies overpriced gasoline by an estimated Php3.48 per liter and diesel by about Php1.48 per liter. (See Table 1)

The figures were based on the estimated impact on local pump prices of the weekly adjustments in the Mean of Platts Singapore (MOPS) prices of gasoline and diesel, as well as of the peso-US dollar exchange rates. The results were then compared to the actual price adjustments implemented by the oil companies. According to the DOE, the Philippines uses the MOPS prices as benchmark for pricing finished petroleum products that are retailed in the country.

Put another way, oil firms were implementing higher price hikes when global prices were rising and lower price rollbacks when global prices were falling. This means that consumers were still being abused by the oil companies even as they were rolling back prices in the last three months of 2018. In fact, looking at Table 1, the oil firms overpriced more during the successive weeks of price rollbacks in October to December.

The Oil Deregulation Law (Republic Act 8479 or the “Downstream Oil Industry Deregulation Act of 1998”) and its regime of price adjustments without public consultations created the environment for such abuse to be committed with impunity.

These allowed the oil firms to rake in around Php33.93 billion in extra profits last year on top of their regular income, and the Duterte administration to collect some Php4.63 billion in additional revenues from the 12% value added tax (VAT). Apparently, it is not in the interest of the government to regulate oil price adjustments because of the tax windfall that high and overpriced oil generates. (See Table 2)

It is important to stress that the “overpricing” based on the MOPS and forex movements does not in any way represent the true extent of how much prices are artificially bloated due to the monopoly control of big oil companies in the global and local markets. It just illustrates how deregulation can be easily abused by the oil firms operating in the country through implementing adjustments that are beyond the supposedly “justified” amounts by so-called international benchmarks such as the MOPS.

During the height of unabated oil price hikes at the start of 2018, the DOE initiated its proposal to unbundle the prices of petroleum products. The latest is that the DOE is already finalizing a circular to implement the proposed unbundling meant to put more teeth in monitoring oil prices and protect the consumers. Industry players and energy officials have already agreed on seven out of the eight major components of the unbundled price.

Understandably, the remaining contentious item in the planned unbundling is the “industry take”, which indicates the profit margin and operation cost of the oil companies. Nonetheless, the DOE expects to finally issue the circular by the first quarter.

While unbundling could make the cost breakdown per liter of fuel products seem more transparent, it will still not guarantee fair price setting. Adjustments in prices will remain deregulated and oil firms, especially the largest ones, can continue to abuse the weekly price adjustments and overprice their products. This is similar to the unbundling of electricity rates in the privatized and deregulated power industry, which did not stop the abusive pricing practices of the big power monopolies.

Besides, real transparency in prices requires that all oil companies disclose their term contracts with their suppliers, detailing key information such as the specific source/supplier of imported oil, the actual negotiated import price, volume of oil imports, etc.

Impact of the TRAIN Law on oil prices

Compounding the overpricing by the oil companies is the additional fuel tax imposed by the Duterte administration. The TRAIN Law (or Republic Act 10963) will add another Php2 per liter in excise tax to the pump prices of gasoline and diesel; Php1 per liter for kerosene; and Php1 per kilogram (kg) for liquefied petroleum gas (LPG). Including the 12% value added tax (VAT), the second round of tax hike under the TRAIN Law will increase the price of gasoline and diesel by Php2.24 per liter; kerosene by Php1.12 per liter; and LPG by Php1.12 per kg.

In 2018, the controversial tax scheme of the Duterte administration already added Php2.80 to the price of diesel; Php2.97 for gasoline; Php3.36 for kerosene; and Php1.12 per kg for LPG, representing the additional excise tax and the corresponding VAT. Adding to this year’s adjustments, the TRAIN Law’s total price impact as of 2019 would be an increase in the pump price per liter of diesel by Php4.80; gasoline by Php5.21; and kerosene by Php4.42. For LPG, the total price hike is Php2.24 per kg or a total of Php24.64 for the usual 11-kg cylinder tank that households use.

The bad news is that there remains still another tranche of excise tax increases next year under the TRAIN Law. The scheduled increases for 2020, including the VAT, are: diesel, Php1.68 per liter; gasoline and kerosene, Php1.12 per liter; and LPG, Php1.12 per kg. Table 3 summarizes the impact of the TRAIN Law on oil prices.

As of the latest price adjustments (i.e., Jan 15, 2019) and including the second tranche of fuel excise tax under the TRAIN Law, the pump price of diesel is more than Php12 per liter higher than its level before the Duterte administration took over; gasoline is almost Php9 higher. Of the said price increases, the additional tax burden (i.e., excise and VAT) imposed by the TRAIN Law accounted for Php5.04 per liter for diesel (41% of the total price increase in diesel under Duterte) and Php5.21 per liter for gasoline (59% of the total increase in the price of gasoline). (See Table 4) 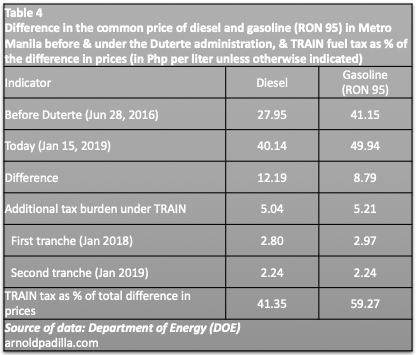 If policy makers were to truly address the problem of high oil prices, they should look at both the TRAIN Law and the Oil Deregulation Law. Removing the unnecessary fuel tax burden and making oil taxation more progressive will immediately bring down the price of oil for sure. But oil prices will remain exorbitant and price adjustments will remain unjustified as long as the oil industry is deregulated. ###