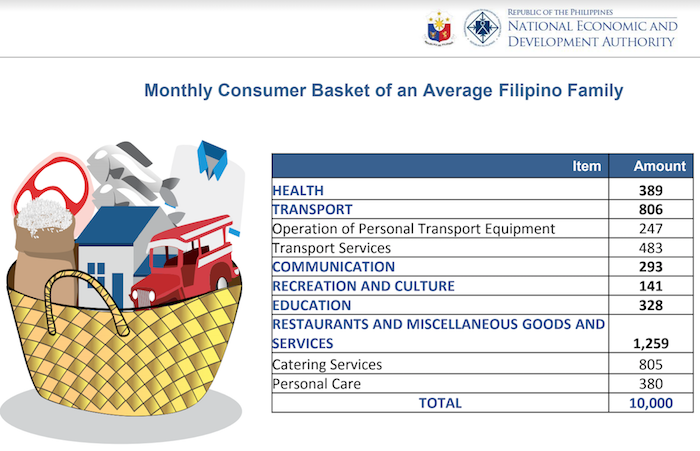 NEDA (National Economic and Development Authority) did not say that a family of five could live decently with Php10,000 a month, according to Rappler’s “Fact-Check”. End of debate?

Actually no. While NEDA may not have directly referred to the Php10,000 as enough for decent living, the whole issue is what the amount of Php10,000 represents.

That “hypothetical” amount – the budget of an average Filipino family, said NEDA – was in fact based on the official poverty threshold fora family of five (i.e., Php9,140 as of first semester 2015, latest official data).

“Food threshold is the minimum income required to meet basic food needs and satisfy the nutritional requirements set by the Food and Nutrition Research Institute (FNRI) to ensure that one remains economically and socially productive. Poverty threshold is a similar concept, expanded to include basic non-food needs such as clothing, housing, transportation, health, and education expenses).”

And there lies the problem. Using the ridiculously low poverty threshold as reference to show that the impact of high inflation and the TRAIN law on ordinary households is tolerable highlights the basic flaw of government’s appreciation of the true extent of poverty in general and of the impact soaring prices and regressive taxes in particular. #