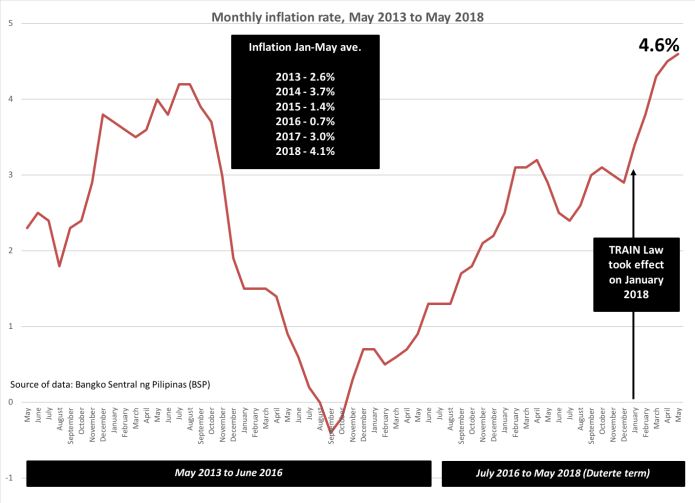 There is no end in sight for high prices under President Duterte.

Inflation rate has reached a new 5-year high this May at 4.6 percent. It has been continuously accelerating every month since the TRAIN Law took effect in January 2018.

Even Duterte’s economic managers could not say whether inflation has already peaked. This means that the public should brace for more surges in prices of basic goods and services in the months ahead.

By the second half of the year, for instance, we are looking at big-time increases in water rates in Metro Manila (earlier reports indicated a basic charge hike of Php8+ to Php12+ per cubic meter) as well as in LRT-1 fares (Php5-7) thanks to privatization. Public transport fares will likely increase too amid deregulated oil price hikes.

The poorer families obviously are the hardest hit but even middle-income households are also not spared.

Transport service Grab has been hiking their rates with impunity, taking advantage of the lack of a reliable mass transport system. Meanwhile, some 170 private schools in NCR have jacked up tuition by 5-15% this school year, which will hit monthly household budgets as most pay on installment basis.

Duterte’s economic managers assure the public that inflation will eventually taper off later in the year. What this means is that prices will continue to increase although at a slower pace than they are doing today. This assumes that global oil prices and foreign exchange rates will move favorably, which is difficult to bank on amid worsening geopolitical uncertainties.

Further, because the downstream oil industry is deregulated, government does not have the needed policy tool to ensure that the public and the economy are protected from sudden and drastic and often speculative increases in global oil prices. Not to mention that the industry remains monopolized and the prices dictated.

Oil continues to be one of the biggest drivers of high inflation in the country. According to the joint DBM-NEDA-DOF statement, oil price increases contributed 0.70 percentage points to the 4.6% May inflation. But increasing petroleum prices also pushed up food prices, with fish and seafood and bread and cereals, for instance, significantly contributing as well to the May inflation with 0.65 and 0.56 percentage points, respectively per NEDA data.

What is certain is that the impact of the additional taxes on consumer prices under the TRAIN law is permanent unless they are removed. Including the latest (June 3) oil price adjustments, the TRAIN law accounts for 29.3% of the total increase in diesel prices this year; gasoline, 32.6%; and kerosene, 34.4 percent.

Amid all these, people do not simply complain but make concrete policy proposals that could at least provide immediate relief, such as removing the additional taxes under the TRAIN law.

But typical of the Duterte administration, we get responses ranging from the arrogant (e.g., Budget Sec. Benjamin Diokno’s crybaby remark) to the ludicrous (e.g., Finance Sec. Carlos Dominguez’s claim that the public’s supposed wasteful spending of their additional income under TRAIN is further driving prices up). #