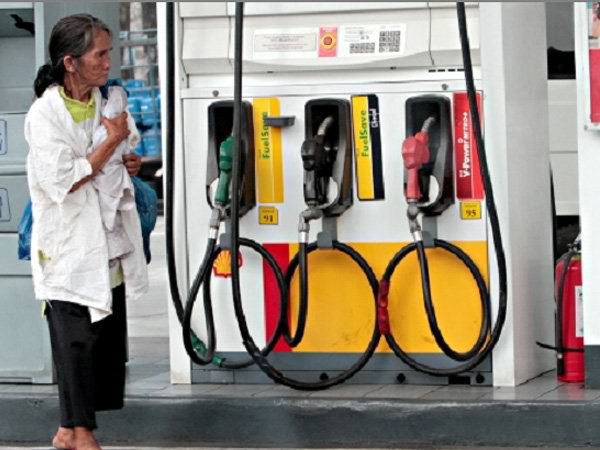 The Tax Reform for Acceleration and Inclusion (TRAIN) law is supposed to accelerate inclusive growth. But its immediate impact has been to accelerate the rate of movement of prices of basic goods and services in the country.

Since the implementation of TRAIN, the country’s inflation rate has continued to climb. Latest figures say that in April, inflation reached another five-year high at 4.5 percent. For the first quarter of the year, inflation averaged 3.8%, the fastest quarterly average since 2014.

Due to its domino effect on the costs of other basic commodities and services, the biggest driver of accelerated inflation rate it appears is oil. For one, TRAIN has significantly raised the pump prices of petroleum products. Inclusive of the 12% value added tax (VAT), the new petroleum excise taxes under TRAIN increased the pump price of gasoline by Php2.97 per liter; diesel, Php2.80; and kerosene, Php3.30 this year.

But TRAIN is just one, small part of the story behind high oil prices. For more than two decades now, oil price adjustments in the Philippines have been deregulated, thanks to the neoliberal policy impositions of the International Monetary Fund (IMF) in the 1990s.

Deregulation means that oil companies could automatically adjust prices at the pump. This year alone, there have been already 15 rounds of oil price hikes, as of mid-May. The weekly price adjustments increased the pump price of gasoline by Php5.10 per liter; diesel, Php6.15; and kerosene, Php5.85.

Table 1 summarizes the impact of the TRAIN law and the weekly oil price adjustments under deregulation on petroleum pump prices so far this year.

These price increases in petroleum products – and the consequent direct and domino impact on inflation – are in fact even more burdensome and abusive for the public than they already are. Taking advantage of deregulation, it appears that oil companies continue their practice of implementing oil price hikes that are bigger than what the world market supposedly warrants. This allows them to pocket extra profits on top of their regular net income, as the government also reaps windfall tax revenues at the expense of consumers.

Looking at local oil price movement from the start of the year up to May 15, the price adjustments in diesel may have been “excessive” by about Php1.03 per liter and gasoline by Php1.34 centavos per liter. This resulted in about Php53.74 million additional collections every day from diesel and gasoline products for the oil companies. Of this amount, Php6.45 million daily go to the Duterte government’s oil VAT collections (on top of its additional revenues from the TRAIN law’s oil excise taxes).

The Department of Energy (DOE) and the oil companies explain that domestic price adjustments merely reflect the movement in global oil prices plus the fluctuations in the foreign exchange (forex). For the Philippines, the international benchmark for refined petroleum products is the Mean of Platts Singapore (MOPS).

But based on the weekly MOPS adjustments and forex fluctuations as posted in the DOE website, the total price adjustments in diesel for the year should have only been around Php4.12 per liter (as of May 15, excluding the week of March 26-30 which the DOE did not post MOPS and forex data on) while the actual net price hike reached Php5.15 during the same period (excluding the weekly adjustment after the March 26-30 period to allow comparison). The same thing is true for gasoline which posted a net increase of Php4.20 per liter when the total adjustments should have only been about Php2.86 per liter.

The process of estimating the price adjustment is pretty straightforward. Oil companies claim that price adjustments for the present week is determined by MOPS price adjustments (expressed in US dollars per barrel) and the average forex in the past week. For instance, if last week the MOPS diesel increased by US$2 per barrel with the forex pegged at Php50 per dollar, how much should the price hike be in local diesel prices for the current week?

Thus, a US$2-per barrel increase in MOPS diesel at Php50 forex rate in the previous week translates to a 70-centavo price hike in the domestic price of diesel in the current week. Anything above 70 centavos is supposedly unjustified or excessive, based on this price adjustment model.

It is important to stress that determining whether price adjustments are justified or not based on the MOPS and forex movements does not in any way represent the true extent of how much prices are artificially bloated due to the monopoly control of big oil companies in the global and local markets. It just illustrates how deregulation can be easily abused by the oil firms operating in the country through implementing adjustments that are beyond the supposedly justified amounts by so-called international benchmarks such as the MOPS.

With the Philippines being one of the world’s most oil intensive economies, even the several centavos that oil companies overcharge through questionable price adjustments already translate to massive extra profits for the oil industry.

Based on 2017 market share (per DOE report), the Big Three which continues to dominate the local market after more than two decades of deregulation, cornered 55% of the estimated daily extra profits of the oil firms – Petron, Php13.05 million a day; Shell Php9.46 million; and Chevron Php3.31 million.

Table 2 summarizes the estimated extra earnings of the oil companies and the government from excessive price hikes in diesel and gasoline.

Again, these guesstimates merely scratch the surface by comparing local and international price changes. In reality, with or without price adjustments, big oil companies that run and control the global oil industry – from the vast oil fields in the Middle East all the way to the thousands of gas stations nationwide, and all the technology and infrastructure that keep this massive network together – retail petroleum at prices many times their actual production costs.

Yet, in 2015, Philippine domestic prices were based on the posted price of around US$51.23 per barrel (2015 average posted price of Dubai crude, based on International Monetary Fund or IMF monitoring). This means that oil firms in the Philippines pegged pump prices at crude oil prices that are about four to six times of the actual production costs.

Under deregulation, the government has abandoned its responsibility to determine if domestic oil prices – whether in terms of price adjustments based on global prices or more importantly, in terms of reasonable prices based on production costs – are justified or not. The public’s burden is aggravated more by price speculation in the global oil market that further artificially drives up local prices which consumers fully bear because of deregulation. #

(First published by Bulatlat.com, this article is an updated version of an earlier blog post.)