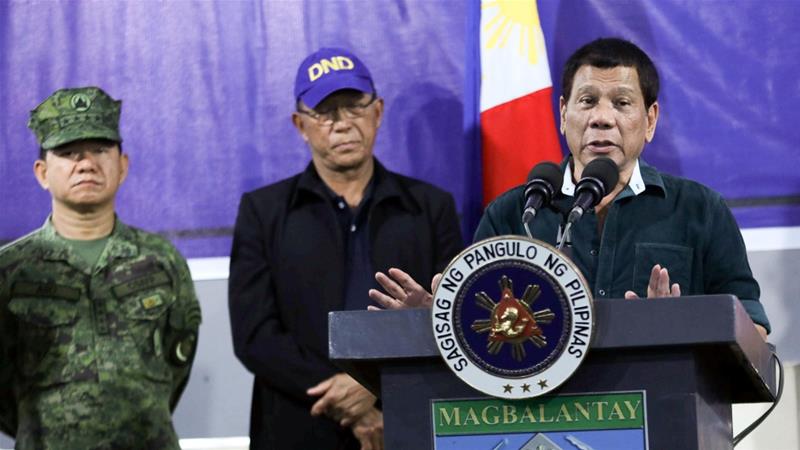 As expected, the so-called supermajority in Congress granted the extension of Martial Law that President Rodrigo Duterte asked for. Martial Law would be in effect in Mindanao until the end of the year.

Malacañang said that with the extension, the country could now “get on with the job of nation-building and contribute in the attainment of the full promise of Mindanao.” The Duterte administration intends to “transform Mindanao into a land of fulfillment”.

How exactly Martial Law could contribute in “nation-building” is unclear. What is clear is that the 261 lawmakers who rubber-stamped the presidential request have further built up the nation’s fear of an authoritarian regime that Duterte wants to establish.

Martial Law in Mindanao and its extension could indeed be just a dress rehearsal and forebodes an of all-out fascist rule that Duterte and his Martial Law generals plan to unleash on the entire country.

Meanwhile, the “attainment of the full promise of Mindanao” pertains to the unrestrained exploitation of the region’s resources. Despite decades of corporate plunder, many areas in Mindanao are still not yet fully exploited.

Business interests with ties to the President appear to be among the beneficiaries of the extension of Martial Law in Mindanao.

The World Bank, for instance, in an August 2016 report said that: “Mindanao has 10 million hectares of land, of which 59.4% or 6.066 million hectares are classified as forestlands… if properly delineated, and rights are defined, can potentially increase the land inventory for large- scale investments.”

In addition, of the remaining 4.14 million hectares of alienable and disposable (A&D) lands in Mindanao, a huge 2.24 million hectares have not been covered by the Comprehensive Agrarian Reform Program (CARP). These millions of hectares of forest and A&D lands offer enormous opportunities for investment and profits.

“If we push for massive agri investments in Mindanao, we need to start looking at the availability of these lands for consolidation to achieve economies of scale,” said the Mindanao Development Authority (MinDA), a government body created to among others promote and facilitate investments in the region.

Under the Duterte administration, MinDA and the Philippine Economic Zone Authority (PEZA) are also working to fast-track the Mindanao Ecozone Masterplan. The plan will develop existing and new economic zones around Mindanao to increase trading activities and attract more foreign investments.

There are 81 accredited ecozones in the region covering agro-industry, manufacturing, information technology and tourism. The Duterte administration is currently conducting an inventory of areas in Mindanao that can be developed as “ecozone cities”.

But many of these supposedly idle areas or available lands are actually occupied by lumad and peasant communities. Their firm resistance and the strong presence of the New People’s Army (NPA) are the biggest obstacles to the massive expansion in Mindanao of corporate plantations, big mining companies, and export-driven industrial enclaves – and the construction of hard infrastructure to support their operation.

The resistance is not against development but against the land and resource grabbing and massive displacement of local communities that often accompany big-ticket investment projects in Mindanao. That is why the NPA, and the lumad, farmers and farmworkers are the real targets of the extended Martial Law in Mindanao.

Indeed, Duterte’s Martial Law is apparently more about providing security to big investors who want to further exploit Mindanao. And it appears that the business sector feels encouraged by the strongman rule that Duterte is imposing. The organizers of the recently held Davao Investment Conference (ICON), for instance, reported record-breaking confirmed attendance, including about 100 foreign investors.

In an earlier report, the organizers said ICON participants include the country’s biggest conglomerates like San Miguel Corp. (SMC) as well as 30-40 “big Chinese investors”, among others.

Duterte has been actively seeking Chinese patronage, mainly in the form of official development assistance (ODA) or loans as well as military assistance. Among those that the administration is pitching to China are multi-billion infrastructure projects in Mindanao including expressways, coastal roads, seaport and airport development, and the Mindanao railway system.

On the other hand, SMC (together with Malaysia’s Kuok Group) is developing about 18,495 hectares of forestlands covering four Davao del Norte municipalities for oil palm production. Just last August 2016, SMC also opened a 2,000-hectare industrial estate in Malita, Davao Occidental that also has a 20-meter deep seaport that can accommodate container vessels.

Earlier, the conglomerate was reported to be looking at a total of 800,000 hectares of lands for development as commercial farms in Zamboanga del Norte, Zamboanga Sibugay, Sarangani, Davao del Sur, South Cotabato, North Cotabato and Agusan del Norte.

Of course, SMC’s top man Ramon S. Ang is known to be “close” to Duterte. The SMC president was among Duterte’s campaign contributors in 2016 giving an undisclosed amount and perhaps other forms of support as Ang wasn’t even listed in the official Statement of Contributions and Expenditures (SOCE).

Ang also offered to buy Duterte a private jet (worth as much as US$65 million) that he could use as President while donating Php1 billion to the Chief Executive’s pet campaign, the war on drugs.

These are some of the big business interests in Mindanao that stand to benefit from the state repression of local communities opposed to their operations. Apparently, Martial Law is more than what President Duterte, his Generals and their allies in Congress are telling us. ###