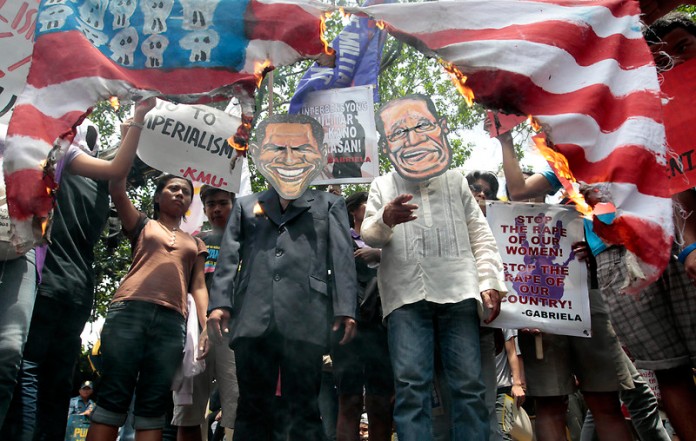 Malacañang announced that defense and security would be on top of the agenda during US President Barack Obama and President Benigno Aquino III’s meeting on April 28. This, of course, is expected. In time for the visit, negotiators have rushed a new defense accord that will facilitate greater US access to and use of Philippine military facilities amid the country’s continuing territorial row with China. Obama and Aquino may sign the controversial Agreement on Enhanced Defense Cooperation next week as one of the concrete results of the highly anticipated meeting.

But another controversial topic may be discussed when the two presidents meet – Charter change (Cha-cha). Obama may discreetly push Aquino to give his open support to ongoing efforts to amend the 1987 Constitution.

Note that the US government and American corporations are among the long-time advocates of removing the constitutional restrictions on foreign investment. In fact, the Obama administration is more direct in its lobbying for Cha-cha compared to its predecessors.

Behind the cover of development assistance and promoting good governance, the Obama administration is quietly propping up the Cha-cha campaign through its so-called Partnership for Growth (PFG). The PFG is a signature inter-agency effort of Obama’s Presidential Policy Directive on Global Development, which claims to “elevate economic growth in countries committed to good governance as a core priority for US development efforts”. It supposedly aligns with policy reform areas outlined by the Aquino administration in its Philippine Development Plan (PDP).

The PFG is defined by the active participation and coordination of more than a dozen US government agencies led by the State Department, US Agency for International Development (USAID) and the Millennium Challenge Corporation (MCC), as well as multilateral donors like the World Bank, International Monetary Fund (IMF), United Nations (UN) agencies and even non-government organizations (NGOs) and private corporations.

In the Philippines, among the initiatives being supported by the PFG through the USAID is the Cha-cha lobby, which is being led by US companies under the American Chamber of Commerce (AmCham). In February 2013, AmCham and USAID launched The Arangkada Philippines Project (TAPP). This initiative pushes for the implementation of the policy proposals contained in the comprehensive advocacy paper “Arangkada Philippines 2010: A business perspective” prepared by the Joint Foreign Chambers of Commerce in the Philippines (JFC) where AmCham is a key member. Among the numerous policy proposals of the Arangkada initiative is addressing the 60-40 constitutional restrictions on foreign investments as well as other reforms for liberalization, deregulation, privatization and denationalization.

Meanwhile, even before the TAPP, the US government has been advocating Cha-cha through the Office of the US Trade Representative (USTR), which regularly brings attention to policy makers the restrictive economic provisions of the Constitution and the implicit message to remove them because they are barriers to US trade and investment. In March this year, the USTR released the 2014 edition of its National Trade Estimate Report on Foreign Trade Barriers covering 58 countries and trade partners of the US. The report is an inventory of the most important foreign barriers affecting US exports of goods and services, US foreign direct investments (FDI) and protection of intellectual property rights (IPR).

For the Philippines, the USTR identified the 30% constitutional limit on foreign ownership in advertising; 40% limit on foreign investment in the operation and management of public utilities (water and sewage treatment, electricity distribution and transmission, telecommunications and transportation); ban on foreigners to practice law, medicine, nursing, accountancy, engineering, architecture and customs brokerage; and restrictions on foreign ownership of land, aside from existing national laws, as among the barriers to trade being implemented by government.

Providing the backdrop to the US Cha-cha lobby is the Trans-Pacific Partnership (TPP), a potential free trade agreement (FTA) to create more profit opportunities for American businesses. The TPP is a key component of the so-called US pivot or rebalancing to Asia, which is the overarching agenda of the Asian tour of Obama that aside from the Philippines also includes Japan, Malaysia and South Korea. Obama’s former national security adviser called the TPP the centerpiece of US economic rebalancing to Asia and platform for regional economic integration. Aside from their territorial disputes with China, another common thread among the four Asian countries that Obama will visit is the TPP where Malaysia is already a negotiating party while Japan and South Korea are expected to join soon, and the Philippines pushing for its inclusion.

While the TPP and US-PH bilateral economic ties are not as controversial as the rushed and secretive new defense agreement between Manila and Washington, these items in Obama’s agenda during his meeting with Aquino do have far-reaching implications, such as Charter change and its impact on Philippine sovereignty and economic development. Several US officials have declared – and admitted by some of Aquino’s Cabinet secretaries – that Philippine membership to the TPP will require amending the Constitution given the highly ambitious liberalization that the US-led FTA is aspiring for.

Obama’s discussion with Aquino on TPP will further heighten persistent US pressure to implement Cha-cha. Last month, a top official of the USTR was in the Philippines and met with Trade, Agriculture and Tariff Commission officials to discuss the country’s possible participation in the TPP. In January last year, a “powerhouse” trade mission composed of executives from US giants Citigroup, Chevron, Coca Cola, General Electric, Procter & Gamble and JP Morgan Chase, among others, also met with Aquino to lobby for Cha-cha and the TPP. The US trade mission was facilitated by the US-Philippine Society (USPS), a business lobby group co-chaired by Manny Pangilinan, a perceived Cha-cha supporter whose businesses are bankrolled by substantial foreign capital (beyond constitutional restriction, such as PLDT).

Do not expect Obama’s Cha-cha lobby to land in official press statements after the visit because the US is not supposed to meddle in the Philippines’ internal affairs and violate its sovereignty. We may just notice, however, a Cha-cha campaign that is more energized than ever. ###

Obama’s victory: the fallacy of lesser evil and illusion of choice

US agenda in Asia and the risks that Aquino is courting

Tubbataha grounding: expect more abuses as US pivots to Asia