For the fourth straight week, oil companies rolled back the price of petroleum products. Flying V led the latest round of price cuts, reducing the price of diesel by P0.30 a liter and gasoline by P0.50. Other oil players are expected to follow suit. The Department of Energy (DOE) said that the rollback is due to the stronger peso which offset the increase in global oil prices.

Compared to their end-2011 levels, pump prices this year are still higher by P1.84 per liter for diesel and by P4.40 for gasoline due to the series of price hikes until mid-April.

But more notably, oil products are still overpriced despite the rollbacks. As of March 2012, diesel is overpriced by around P7.86 per liter and gasoline by P16.18 per liter.

These are based on the monthly movement of Dubai crude and foreign exchange (forex) rate and their estimated impact on the pump price based on a rule of thumb being used by one of the major oil firms.

The estimated impact on the pump price, using the said rule of thumb, varies depending on the respective levels of Dubai and forex in a given month. For instance, in March, Dubai averaged $122.36 per barrel while the forex was pegged at P42.86 per dollar which translates to an estimated impact of P1.20 per liter on local prices for every one dollar increase in Dubai price and for every one peso increase in the forex rate. (See Table 1) 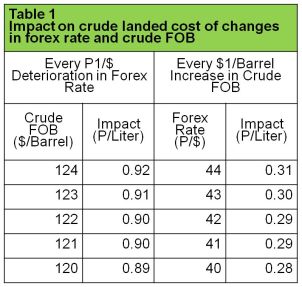 Other estimates also show that oil firms are overpricing their products as they take advantage of automatic price adjustments under the ODL. Think tank IBON Foundation, for instance, estimated that diesel prices are increasing 20-22% faster than Dubai crude prices since 1999. Former National Economic Development Authority (NEDA) chief and now Senator Ralph Recto also testified before a Manila court that overpricing could reach P8 per liter.

These (local) overpricing estimates simply illustrate that local pump prices increase higher than what movements in global oil price and forex warrant (or smaller in case of rollbacks). They do not represent yet the effect of global monopoly pricing and speculation.

The so-called Independent Oil Price Review Committee (IOPRC) set up by the DOE should be looking into these claims. This body is supposed to “study the alleged accumulation of excessive profits by oil companies resulting in grossly unfair pricing”.

It has been conducting “consultations” with people’s organizations to better carry out its mandate, so they say. But its last meeting with members of the Coalition Against Oil Price Increases (CAOPI) ended up as a debate for the most part. The IOPRC headed by staunch neoliberal economist Benjamin Diokno insisted on the parameters imposed on it by the ODL. Diokno, for instance, refused proposals to probe supply contracts and other documents that are key to the determination of excessive profits and overpricing.

The lone point raised by CAOPI seemingly agreed to by the IOPRC in that meeting was the change in venue. If the review body is independent, it should use a neutral venue and not the premises of the DOE whose officials are often accused of speaking in behalf of the oil firms. Alas, even that very minor point apparently has not been heeded as consultations tomorrow (May 7) will still be held inside the DOE compound.

Then again, it would be wrong to pin our all our hopes on the IOPRC, whose members have displayed strong bias to the heartless market. Even as groups like CAOPI engage the IOPRC as well as Congress, the best prospects to end overpricing and the abuses of the oil firms and the ODL that perpetuate them still lie in the people’s direct political action. (end)