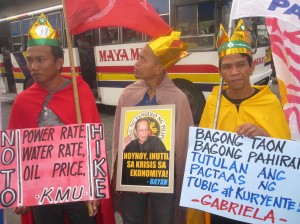 Activists mark today's (Jan. 6) Three Kings feast by reminding the Aquino administration to address the pressing economic issues facing the people and not only squeeze political brownie points from the Corona impeachment trial

Government’s so-called “inclusive growth” outlined in the Philippine Development Plan (PDP) 2011-2016 rests on a target of 7 to 8% annual expansion in the gross domestic product (GDP). But due to various factors, GDP growth for 2011 – the first full year of the Aquino administration – is hoped to grow, at best, by 5.5%. This is the official forecast of the interagency Development Budget Coordination Committee (DBCC), an optimism that is not shared by most analysts and institutions. Both the International Monetary Fund (IMF) and the World Bank, for instance, project a moderate growth of just 3.7% in 2011. (Read here and here.)

Indeed, the promised inclusive growth of President Benigno S. Aquino III remains elusive as ever. Unlike the common criticism, however, the poor GDP showing in 2011 is not simply the result of government underspending. Rather, the slowdown actually highlights the structural defects of the economy that has since time immemorial depended too much on the volatile world economy. Further, beyond the quantitative failure to meet the target for inclusive growth are the far more important qualitative issues hampering long-term development and poverty alleviation in the country.

The National Statistical Coordination Board (NSCB) reported in November that the GDP for the third quarter of 2011 grew by just 3.2 percent. While slightly higher than the recorded 3.1% in the previous quarter, the latest data continued the downward trend in the country’s economic performance. Since peaking at 8.9% in the second quarter of 2010, GDP growth has progressively decelerated. Also, the average GDP growth through the three quarters of 2011 is pegged at 3.6%, way below the 8.2% it posted during the same period in 2010. (See Chart) 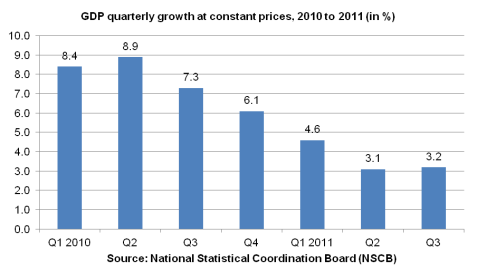 2010, of course, was an election year. As such, it artificially boosted consumption and production due to election-related spending (including the cost of greasing the contending politicians’ fraud machineries). There was also the base effect of the low growth in 2009 due to the global recession. However, the huge drop of 4.6 percentage points in GDP growth last year was equally compounded by the continuing and worsening crisis facing the world economy.

Export-oriented domestic production is thus vulnerable. Philippine exports from January to October 2011 declined by 4.3% compared to the same period in 2010, according to the National Statistics Office (NSO). Electronic products, which comprised more than 50% of the total value of exports, fell by 21.9 percent. Almost 74.5% of electronic exports were semiconductors, which contracted by 24.9 percent.

Falling demand in the country’s major foreign markets explain the decline. Some 45.3% of Philippine exports in 2011 went to Japan, the US and Europe, which all confronted a substantial slowdown in their economy this year. The country’s total exports to the European Union (EU) – currently dealing with a grave sovereign debt crisis – fell by 19.5% while exports to the US fell by 6.9 percent. These significant declines offset the 15.5% increase in exports to Japan. Meanwhile, exports to its Southeast Asian neighbors, which accounted for 18.4% of total exports, declined by a huge 23.3% this year. Many of these exports actually end up in Japan, the US and Europe, accounting for the big drop.

But despite the slowdown, government claims that economic growth is becoming more inclusive as unemployment supposedly eased last year. The October 2011 round of the Labor Force Survey (LFS) of the NSO reported that the jobless rate declined to 6.4% from 7.1% in the same period last year. For the whole year, official unemployment rate averaged 7%, which was lower than 2010’s 7.4 percent.

Official employment data, like the poverty data, are unfortunately not a reliable yardstick to measure the extent of joblessness. The NSO, for instance, does not count as unemployed those who are seeking work but for one reason or another (e.g. school or family obligations, illness, etc.) will be unavailable for work despite an opportunity within two weeks after the survey.

Despite this defect in determining the volume of jobless, trends in the quality of employment in official statistics still could not conceal a deteriorating jobs situation. Underemployment worsened to 19.3% last year, according to NSO data, from 2010’s 18.8% or an increase of 525,000 workers. Underemployed refers to all employed persons who want to have additional hours of work in their present job or an extra job, or to have a new job with longer working hours.

Also, the services sector accounted for the largest number of workers permanently displaced and firms resorting to permanent closure/retrenchment due to economic reasons last year. January to June 2011 data from the Bureau of Labor and Employment Statistics (BLES) show that out of 14,598 workers displaced due to economic reasons, 8,697 (59.6%) were service workers. In addition, out of the 968 firms that closed shop or retrenched workers, an overwhelming 729 establishments (75.3%) were from the service sector. In 2010, services accounted for 67.9% of workers displaced and 76.5% of firms resorting to permanent closure/retrenchment due to economic reasons. These numbers highlight the unsustainability of job creation that has been increasingly relying on the less productive service sector.

Meanwhile, a more realistic count of unemployed is provided by the Social Weather Stations (SWS). Unemployment rate this decade, based on compiled SWS survey results, has averaged by almost 20% a year from just 10% in the 1990s. In its last survey on adult unemployment in March 2011, the SWS reported that 27.2% or around 11.3 million workers are jobless.

As always, labor export has filled in a portion of the gap in domestic jobs available and labor supply due to lack of a long-term and effective government program. Deployment of overseas Filipino workers (OFWs) from January to October 2011 increased to 1.35 million from 1.28 million during the same period in 2010. Furthermore, OFW remittances have also become a significant contributor to domestic consumption, propping up an otherwise cash-strapped consumer market. From January to October last year, OFW remittances reached $16.53 billion, which was 6.9% higher than 2010’s similar period.

But again, because of the deteriorating crisis and worsening overall global economic condition, labor export is becoming less and less reliable as a source of remittances and even jobs. Compiled data from the from the Philippine Overseas Employment Administration (POEA) show that from an annual deployment growth of 6.9% in the 1990s, the figures have slowed down to 5.6% in the 2000s, and to about 4.3% in the past two years. OFW remittances are slowing down even more sharply, based on data from the Bangko Sentral ng Pilipinas (BSP). From a robust 23.2% annual growth in the 1990s, it has declined to 10.3% in the 2000s, and to just about 7.6% in the last two years.

The still increasing, albeit slower, deployment of OFWs amid the declining economic opportunities abroad means even more intense exploitation and oppression for desperate migrant workers in the form of depressed wages, harsher working conditions and other forms of abuse. According to Migrante International, more than 120 OFWs are in death row while some 7,000 are in jail in various countries worldwide. Every day, as high as 10 migrant workers are being sent back home dead due to various causes. Crisis and poverty are forcing more and more migrant workers to illegal activities including drug trafficking that led to the execution of four Filipinos in China last year alone. The sorry plight of migrant workers is aggravated by government neglect like budget cuts and missing funds for OFW welfare. #

To be concluded (read here)