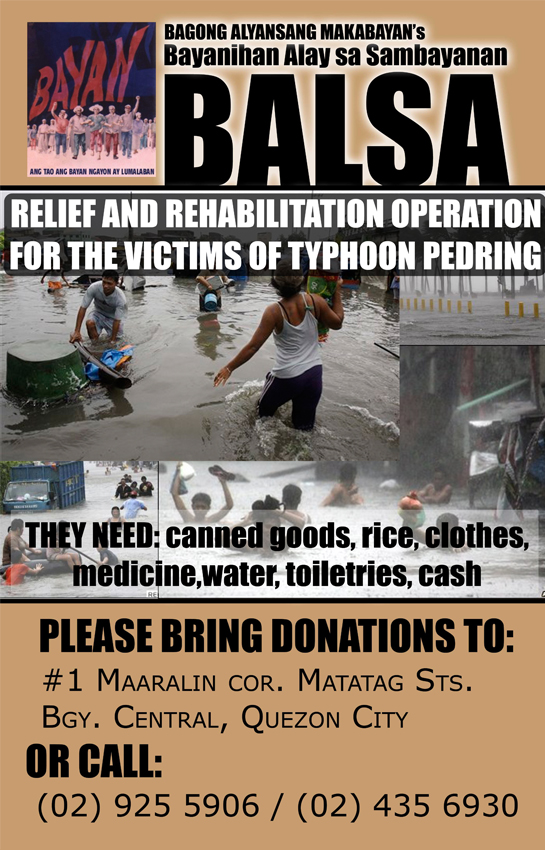 To help in the ongoing relief efforts by various sectors for victims of typhoon Pedring, the Bagong Alyansang Makabayan (BAYAN) has re-launched the Bayanihan Alay sa Sambayanan (BALSA), a multisectoral campaign to raise relief goods and conduct relief distribution operations in calamity-hit communities. The group is currently accepting donations for its BALSA relief campaign. (See poster above for details)

According to the National Disaster Risk Reduction and Management Council(NDRRMC), Pedring has affected more than 582,626 families or almost 2.73 million people in 3,252 barangays/300 municipalities/41 cities in 34 provinces of Regions I, II, III, IV-A, IV-B, the Cordillera Administrative Region (CAR), and the National Capital Region (NCR). Some 80,889 families or 362,552 people have been relocated to various evacuation centers. Meanwhile, official estimates as of Oct. 3 peg the cost of Pedring’s damage to properties and livelihood at more than P8.8 billion (or almost US$205 million at P43/US$), of which P7.55 billion (almost US$176 million) represent the cost of destroyed crops, livestock, and fisheries. Pedring also destroyed almost P1.25 billion (around US$29 million) worth of school buildings, hospitals, roads, bridges, and other important infrastructure. (Read the complete report of the NDRRMC here.)

In 2009, BAYAN also initiated BALSA relief drives to help those affected by typhoons Ondoy and Pepeng in Metro Manila, Laguna, Pangasinan, and Baguio. With the support of various organizations, relief formations, and institutions, BAYAN provided relief goods to around 4,300 families in 12 barangays in three cities and two provinces badly hit by the flooding and landslides.

(Read the complete report of the BALSA 2009 relief campaign here.)

For the victims of Pedring, BAYAN has already distributed last Oct. 1 the first batch of relief goods it has collected from various donors to residents of San Mateo, Rizal. (See photos here.)

Meanwhile, the Aquino administration blames climate change for the devastating storms that have hit the country in recent years, including Pedring, Ondoy, and Pepeng. But as BAYAN pointed out, while the string of calamities “served as a grim reminder of the reality of climate change and how vulnerable the country is especially with a government that is obviously ill-prepared to deal with natural disasters”, the calamities also showed “how policies and projects long opposed by the people like large-scale dams and foreign mining do cause death and destruction, and thus the urgent need to institute policy reforms.”

While BAYAN will continue to demand accountability from the national government and campaign for policy changes to avoid a repeat of the enormous devastation of lives, properties and livelihood due to typhoons, it also intends, through the BALSA, to bring attention to the remarkable spirit of bayanihan (“helping one another”) among Filipinos. As the group said, “For BAYAN and our member-organizations, partners and friends, the slogan ‘Serve the people’ has always been more than just a catchphrase, but a way of life.” #

One thought on “BALSA: an urgent appeal to help the victims of typhoon Pedring”