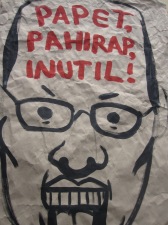 Amid 27 rounds of diesel price hikes since becoming President and unabated profiteering by oil firms, Aquino displays a helpless and defeatist attitude

Less than a week before the second State of the Nation Address (SONA) of President Benigno S. Aquino III, oil firms again jacked up their pump prices. On Monday (July 18), oil companies hiked the price of diesel by P1.10 a liter; kerosene, P1; regular gasoline, P0.60; and unleaded gasoline, P0.30.

This is the second consecutive round of oil price hikes in the weeks leading to Aquino’s second SONA. Last July 12, oil firms raised the pump price of unleaded gasoline by a whopping P2 per liter and diesel, P0.80.

The Aquino administration can, of course, pin the blame on rising global oil prices and claim that it is beyond its control. But precisely because of this helpless and defeatist attitude that oil companies are able to aggravate the plight of the people as they continue to profiteer from rising oil prices. 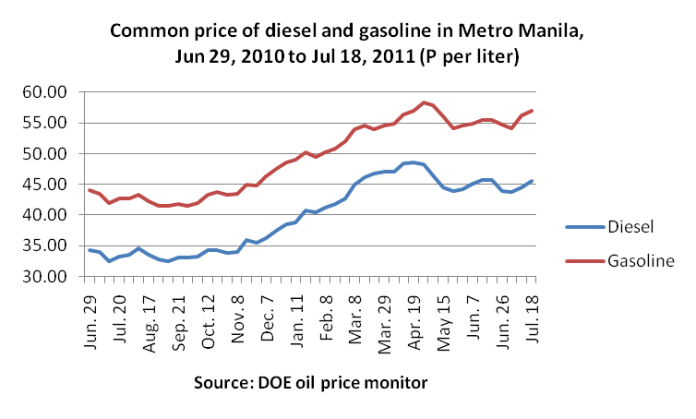 Local oil prices, of course, have already been rising rapidly even before Aquino became President especially since the downstream oil industry was deregulated in the late 1990s. Aquino, however, refused to support the demand by various sectors to repeal Republic Act (RA) 8479 or the Oil Deregulation Law. In this regard, Aquino is liable to the people.

RA 8479 allowed oil firms to adjust pump prices automatically based supposedly on price changes in the world market. Because the industry is dominated by the international oil cartel of American and European firms, the law merely gave the big oil players more room to pad the true cost of oil products in the country. Aside from monopoly pricing, oil prices in the world market are also artificially bloated by speculation. All this is fully passed on to consumers making oil prices excessively high.

Due to deregulation, oil companies in the Philippines are also able to rake in additional profits by implementing weekly price adjustments that are beyond what supposed international price benchmarks warrant.

From January to July 12 this year, for instance, the pump price of diesel should have only gone up by an estimated P5.45 per liter based on the movement of benchmark Dubai crude as well as the foreign exchange (forex). During the period, the monthly average of Dubai jumped from $92.19 per barrel in January to around $109.5 in the first two weeks of July. Forex, on the other hand, improved from P44.17 per US dollar to about P42.71. (See Table) 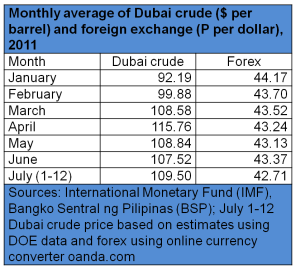 But actual change in diesel’s common price in Metro Manila reached P7.10, indicating an over-recovery of P1.65. The same thing could be observed in the pump price of unleaded gasoline which increased by P7.95 per liter, for an estimated over-recovery of P2.50. Since the oil price crisis in 2008, the accumulated profiteering by local oil firms has now reached about P8.37 to P9.22 per liter.

Instead of marshaling his allies in Congress to work for the repeal of RA 8479 and support proposals like House Bill (HB) 4355 filed by the progressive bloc of partylist groups at the House of Representatives, Aquino implemented the Pantawid Pasada. Not only is this seriously lacking as a relief measure, it also underscores Aquino’s lack of interest in implementing fundamental reforms in the economy to address longstanding problems like exorbitant oil prices, energy insecurity, and abusive practices by foreign cartels.

Oil price hikes could have been mitigated by cancelling the Arroyo-era 12% value-added tax (VAT) on petroleum. But even this was rejected by Aquino because it might turn off the foreign creditors and credit rating agencies. The Aquino administration today is collecting a VAT of around P5.47 a liter on diesel and around P6.83 on unleaded gasoline. When Arroyo stepped down, the VAT on diesel then was only about P4.11 per liter and unleaded gasoline, P5.28.

Aquino’s supporters often dismiss critics of the administration as simply impatient. It has only been one year, they point out. Change is not an overnight process, they say. To be sure, no one’s asking the President to change the country in one year. But it must be also recognized that the problems facing our people are urgent, requiring immediate and decisive action from Aquino.

Oil prices, as mentioned, have risen by P11 to 12 a liter via 27 to 28 rounds of oil price hikes in just a year while oil firms continue to overprice their products. In just one year, jeepney drivers saw their income being eroded by more than P340 a day due to unabated oil price increases. The same thing is true for millions of farmers, fishers, households, etc that rely on petroleum products on a daily basis.

Some transport groups have used the latest surge in petroleum prices to again press for another round of fare hike. At the start of year, the minimum fare for jeepneys has been raised by P1 due to unabated increases in the price of diesel. Just four months ago, the minimum fare for buses has also been increased by P1. Driven by escalating fuel prices, inflation last month reached 4.6 percent – the highest since April 2009.

Issues like these need immediate attention. The people have every right to be impatient. Aquino does not enjoy the luxury of time.