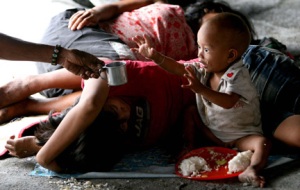 Pilipinas nino? Aquino has never made the poor and oppressed feel that this is also their country (Photo from talakayanatkalusugan.com)

President Benigno S. Aquino III today (June 30, 2011) will mark his first year in office by launching a campaign called Pilipinas Natin. According to the Presidential Communications Operations Office, Pilipinas Natin “represents the point of departure from the failed policies of incremental, trickle-down growth that characterized previous development plans.” It added that “vigorous job creation, educational reform, and comprehensive social and development programs will be implemented to ensure attainment of sustained economic growth.”

Malacañang spokesperson Edwin Lacierda, meanwhile, called the campaign “a call to arms for the people to continue in the efforts for reform by this administration.” It supposedly aims to “mobilize the people to become active participants in nation building.”

The public certainly wants to see the substance, if there’s any, of this latest publicity stunt by Malacañang. How exactly does the President intend to mobilize the people and implement the promises of jobs, education, and comprehensive social development?

However, based on his administration’s one-year track record, the poor and oppressed couldn’t help but ask, “Pilipinas nino?” Exactly what kind of nation are we building that Filipinos will rally behind? Pilipinas nino—because Aquino in one year has made it unmistakably clear where his bias lies.

Aquino has shown that he favors the market over the people. Look at how he refused to impose price control and justified deregulation amid escalating prices of basic commodities and services. His public-private partnership (PPP) is for big business’ profits at the people’s expense. Look at how he allowed the 300% hike in SLEX (South Luzon Expressway) toll and how he pushed for as much as 100% fare hike in LRT/MRT despite strong opposition from various sectors.

He favors foreign creditors over the people. Look at how he defended the 12% VAT (value-added tax) because scrapping the onerous tax will turn off the foreign banks. Look at how he spent more than half of the people’s money for debt servicing in his first year in office while spending practically nothing for the marginalized, like the urban poor’s housing needs.

He hastily phoned the governor of Quezon province to stop bugging the Japanese investors of the Pagbilao power plant over P6 billion in unpaid real estate taxes, saying that Malacañang will foot the bill. He promised PPP investors protection from local courts, Congress, and regulatory bodies through regulatory risk guarantee.

But he refused to display the same decisiveness and political will to help workers secure a substantial wage hike through legislation. Or to provide respite to urban poor communities from violent demolitions. Or to oblige his own family to respect the historical, legal, and moral rights of farmers and plantation workers over the Luisita lands.

All hope is not lost, however. It just doesn’t lie in Aquino’s hands.

The people could still make this country truly ours, truly Pilipinas natin. (End)