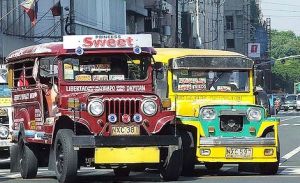 As a program for immediate relief from the impact of high oil prices, the Pantawid Pasada is not even enough (Photo from http://www.metropolitanmanila.com)

Updates: Malacañang announced that starting April 11, jeepney and tricycle drivers can avail of the fuel subsidy smart cards. (Read here) However, it later clarified that what authorities have started is the processing of the applications for the smart cards and not the actual distribution which will start, as earlier announced, on May 1 or 2. (Read here) Meanwhile, the price of gasoline and diesel has gone up again by P1.50 per liter (Read here), increasing the daily fuel cost of jeepney drivers by P45 and thus wiping out the P35 daily fuel subsidy even before it can be implemented.

On the heels of the first major protest on the issue of skyrocketing oil prices under the Aquino administration, Malacañang announced that the President has approved a P500-million fuel subsidy. According to President Benigno S. Aquino III, the money will come from “savings of government due to increased revenues” and will subsidize a portion of fuel consumed by public utility vehicles (PUVs) except buses. The amount was reduced to P450 million when the official directive was finally released through Executive Order (EO) 32 one week since its approval was announced by the Chief Executive.

The government first announced that it is drafting such a proposal four days before the transport caravan and protest called by people’s organizations last March 31. The initial disclosure was made by Secretary Ricky Carandang of the Presidential Communications Development and Strategic Planning Office in an obvious attempt to dull public support to the protest, which also included transport strikes in various parts of the country. Apparently maximizing the PR value it can squeeze from the fuel subsidy, the Department of Energy (DOE) said that the smart cards containing the assistance will be given to the drivers on Labor Day, May 1.

But Aquino’s response to the people’s protest is a futile effort to calm the restive public over the weekly oil price hikes. First, it does not answer the basic issue of unreasonable increases in pump prices allowed by the Oil Deregulation Law and made even more oppressive by the government’s continued collection of the 12 percent value-added tax (VAT) on petroleum and the oil firms’ unabated profiteering. Compared to what the Aquino administration is earning from the oil VAT and to the profits being squeezed by the oil companies from motorists and consumers, the P450 million to subsidize public transport are crumbs, to say the least.

Second, as a program for immediate relief from the impact of high oil prices, the fuel subsidy is not even enough. It covers only a certain portion of the population (jeepney and tricycle drivers) and excluded other vulnerable (and bigger) sectors that are also reeling from the impact of escalating fuel prices like the small fishers and farmers who use gasoline in their production, the poor households that use LPG and kerosene, etc . Moreover, EO 32’s limited coverage is further hampered by the very measly amount that each jeepney and tricycle driver will get for a limited duration, an amount that will even be eroded in the coming weeks as oil prices continue to climb.

EO 32 established the Public Transport Assistance Program (PTAP) or the so-called “Pantawid Pasada” to provide targeted relief to the jeepney and tricycle drivers in the form of partial subsidy to their fuel consumption.  The PTAP, for Malacañang, is “the most equitable and efficient form of intervention” to protect the vulnerable sectors. Smart cards will be issued to qualified beneficiaries to ensure the “integrity of the disbursements” that shall be funded by the Special Account in the General Fund (SAGF) of the Department of Energy (DOE). The SAGF includes proceeds from the Malampaya oil field in Palawan.

While the Inter-Agency Energy Contingency Committee (IECC), a body formed by Aquino last month to prepare precautionary measures amid the rising tension in the oil-rich Middle East and North Africa region, recognized that the “public transport sector has been the hardest hit by the oil price hikes” since oil is one of its major operating costs, EO 32 does not cover the entire public transport sector. Energy Secretary Jose Rene D. Almendras has earlier said that buses were excluded from the fuel subsidy because they have already been granted a provisional fare hike of P1.

Beneficiaries, in the case of jeepney drivers, shall be identified by the Land Transportation and Franchising Regulatory Board (LTFRB) on a per franchisee basis and on the number of franchised units. This means that jeepney drivers and operators must first prove that their units are covered by a legitimate franchise to qualify for the fuel subsidy. This requirement will unduly prolong and complicate the process of accessing the subsidy and in the end may only discourage the drivers from availing of the assistance. It will also exclude a significant portion of drivers that are not covered by a valid jeepney franchise. According to the DOE, there are 214,596 jeepney units with valid franchises nationwide that will be covered by the Pantawid Pasada. However, estimates say that there are more than 230,000 jeepney units nationwide, which means that around 15,000 units are not covered by a franchise.

Such requirement misses the point in providing immediate economic relief. It’s like saying that only documented overseas Filipino workers (OFWs) will be evacuated by the government from Libya and illegal migrants should fend for themselves amid the crisis. Providing economic relief for all drivers is not promoting or tolerating so-called “colorum” (without franchise) jeepneys. That is the job of transportation officials to implement. But it’s a different matter if the government will use an economic relief program to punish colorum jeepneys and their drivers.  All jeepney drivers and their families are hard hit by oil price hikes whether they have a valid franchise or not.

For tricycle drivers, the Department of Interior and Local Government (DILG) and the local government units (LGUs) will coordinate to identify beneficiaries, according to EO 32. It is unclear how the fuel subsidy will be provided to almost 1 million tricycle units nationwide.

Meanwhile, the EO did not say how much the subsidy will be. Earlier reports quoted Almendras as saying that each smart card will have a value of P1,500 while other reports said that the subsidy was P2 or 3 a liter. When the amount was finalized, it turned out that each jeepney unit covered by a legitimate franchise will get only P1,050 per month or P35 per day, an amount that is not even enough to buy a liter of diesel. A jeepney unit usually consumes 30 liters in one day. Given the common price of diesel of P47.10 per liter in Metro Manila as monitored by the DOE, the fuel subsidy constitutes a measly 2.5 percent of the daily cost of diesel being shouldered by a jeepney driver.

Tricycle drivers, on the other hand, will receive P150 per month, or P5 per day.  The subsidy could go up if the LGUs can raise counterpart funds, Almendras said. This discriminates against tricycle drivers who are under poorer LGUs that could not raise resources. Like in the case of jeepney drivers, the P5 per day-assistance is also a very small amount relative to what tricycle drivers spend on gasoline which is around P54.85 a liter in Metro Manila (common price). Considering that they use 4 liters a day on the average, the Pantawid Pasada for tricycle drivers is thus equivalent to just 2.3 percent of their daily fuel cost.

The already insignificant fuel subsidy is actually even much smaller because it is allocated on a per unit basis and not per driver. In many cases, one jeepney or tricycle unit has two or even three drivers who take turns during the week. Thus, in effect, two to three drivers will share the P1,050 or P150 monthly fuel subsidy that will be provided by the Aquino government.

In addition, by the time that the fuel subsidy becomes available on May 1, oil prices have already climbed higher thereby further eroding whatever impact the Pantawid Pasada has on the cost of fuel.  On the average, the pump price of diesel has been increasing by 61 centavos per liter every week this year and gasoline by more than 45 centavos. If this trend continues, the price of diesel would have already gone up by almost P2 a liter and gasoline by almost P1.50 by the time jeepney and tricycle drivers get their Pantawid Pasada smart cards on Labor Day.

And by the way, because of the value added tax (VAT) imposed on petroleum products, 12 percent of the Pantawid Pasada will actually return to the government.

One thought on “Noynoy’s fuel subsidy: Why the Pantawid Pasada is not enough even as pantawid”