On Tuesday (Mar. 8), oil firms implemented the eighth round of oil price hikes this year and the third round in one week. All in all, the pump price of diesel has already increased by P6.75 per liter since January; kerosene, P6.50; and gasoline, P6. The retail price of liquefied petroleum gas (LPG), on the other hand, posted a net decrease of P1.90 per kilogram (kg). But recent trends show an uptrend in the LPG international contract price, consequently hiking the local retail price by P2.50 per kg since March 1. (See Table 1) 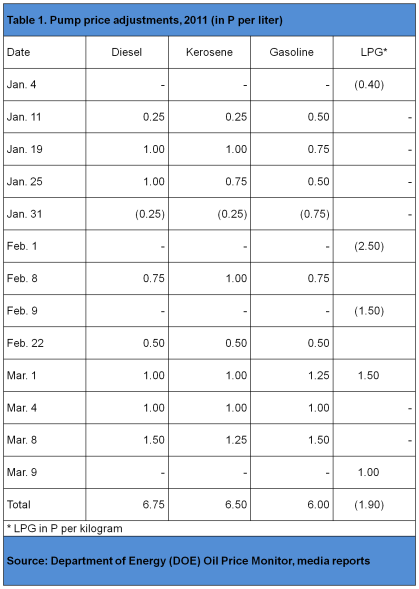 The pace with which pump prices are increasing is very alarming. This year, the price of diesel at the pump is rising by almost 68 centavos a liter per week and those of gasoline and kerosene by 65 centavos and 60 centavos, respectively. Just to give you an idea how bad the situation is, note that during the 2008 oil price crisis, the retail price rose by just 57 centavos a liter per week. This, of course, is just an average. At its peak (June and July), the 2008 crisis jacked up local pump prices by P1.42 a liter per week. Unfortunately, we all have no idea if the current surge in prices has already peaked or at least nearing the summit. As we speak, tension continues to build up in the Middle East, with protests now spreading to Saudi Arabia. Meanwhile, the US is planning to intervene militarily in the Libyan civil war. These fuel more speculations, driving wild spikes in prices like in 2008. But unlike in 2008, the oil rich regions are today embroiled in serious volatility that may actually disrupt supply which means more bad news for importing countries like ours.

Certainly, there is no actual shortage yet with most members of the Organization of Petroleum Exporting Countries (OPEC) pumping more oil than their individual quotas even before the unrest in Libya. The spare capacity of OPEC is pegged by the International Energy Agency (IEA) at 4.9 million barrels a day or about three times Libya’s output. Spare capacity means capacity levels that can be achieved in 30 days and sustained for 90 days. Oil inventories of the world’s largest economies under the Organization for Economic Cooperation and Development (OECD) also exceed the normal 52-54 days with 57.5 days in December. Nevertheless, taking early measures to prepare for a possible supply disruption is a prudent decision on the part of President Aquino who created an Inter-Agency Contingency Committee (IACC). The Department of Energy (DOE) has also imposed a minimum inventory of 30 days for refiners and 15 days for importers of finished products.

However, the real problem right now is not supply but the skyrocketing costs of oil and its impact on the people, especially the poor. Although much of the increases in the global oil prices are speculative (there is no actual shortage, only fears of shortage), Filipino consumers bear the full brunt of soaring prices because of the Oil Deregulation Law or Republic Act (RA) 8479. Worse, oil companies have been taking advantage of the deregulated downstream oil industry to overprice their products. In a deregulated environment, oil firms simply “text” someone in the DOE that they are increasing prices, as a matter of FYI. This system obviously creates a lot of room for abuses. To illustrate, from 2008 to January this year, oil firms have implemented price hikes that were bigger than what changes in global prices and foreign exchange warrant. Similarly, they also implemented smaller rollbacks. The net result is an overpricing of around P7.50 per liter.

P7.50 per liter in overpricing

Thus, on top of the speculative increases, consumers also shoulder the cost of overpriced oil which is an enormous burden for ordinary folks. Consider, for instance, a lowly tsuper who uses 30 liters of diesel for his jeepney in a one day. Through overpricing, oil firms are robbing each of the more than 400,000 jeepney drivers nationwide and their families around P225 per day. About 8.6 million households that use LPG are being robbed of some P147.58 per month. More than 700,000 fishers, who are the poorest sector in this country (50% of them try to survive on just P41 a day), shell out P75 per fishing trip to cover the cost of overpriced gasoline. The poorest Filipino households use kerosene for lighting and cooking and even they are being squeezed dry by the oil companies. (See Table 2) 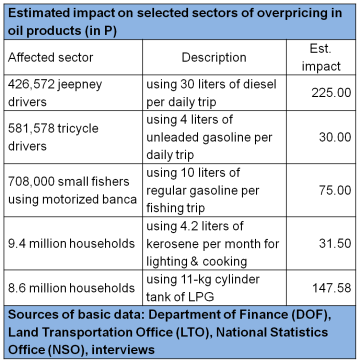 From the burden of these poor sectors and the rest of consumers, oil companies squeeze P369.65 million everyday in extra profits from overpricing. Of this amount, Petron accounts for P124.59 million, followed by Shell with P91.41 million; Chevron, P40.66 million; Total, P14.31 million; and other players, P54.32 million. Even the Aquino administration gets its share from the profiteering of the oil companies through the 12% value added tax (VAT) imposed on oil to the tune of P44.36 million daily. (See Chart) 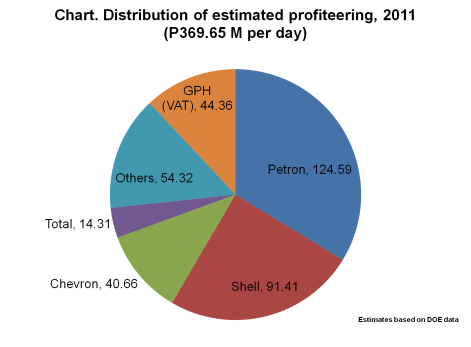 The Aquino administration at first refused to engage the issue of skyrocketing prices, as it has done on the general increase in prices of basic goods and services. (Read “A regime of high prices: Aquino’s apathy towards the poor”). But as the oil price hikes rage on and escalating people’s protests over high prices loom, government is now at least showing a semblance of concern. The Department of Finance (DOF) is reportedly considering subsidizing oil products consumed by the poor and reducing the VAT on petroleum. These measures are apparently the most “drastic” proposals that government is ready to make.

While any measure that can immediately bring down the price of oil (especially the scrapping of the 12% oil VAT) to provide much needed relief is welcome, we need a truly drastic reform. Overpricing must be addressed because even during times of low prices, consumers are still being exploited by the oil companies. Of course, there is a task force composed of the DOE and the Department of Justice (DOJ) that the Oil Deregulation Law created to look into the abuses of the oil players. But in the 13 years that this task force has existed, not a single oil company has ever been penalized for overpricing. Not even when the Director General of the National Economic and Development Authority (NEDA) himself is saying that they are overpricing (remember now Sen. Ralph Recto’s allegation in 2009 that oil products were overpriced by P8 a liter?).

The excuse for this is simple. As argued by the late Angelo Reyes, who as the then DOE chief lambasted Recto’s claim, there is no such thing as overpricing or a standard formula under deregulation. Every price adjustment is justified as a business decision in the name of competition and driven by the world market. But we all know that this is hogwash. More than eight out of every 10 liters of oil sold in the domestic market are from just four companies (Petron, Shell, Chevron, and Total) with tight links to the global oil cartel. They set the price adjustment and everyone else just follows. Government should stop using the world market as an excuse for being helpless. Otherwise, there is no more need for a government. At the very minimum and as an immediate policy reform, we need to regulate the price adjustments through a system of credible, democratic, and transparent public hearing. Hindi pwedeng “text-text” lang ang oil price hikes. (end)