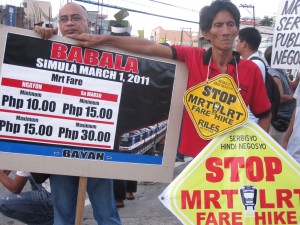 One of the most basic questions that we have been asking DOTC and LRTA officials is what constitutes their estimated full cost fare of P35.77 for LRT 1, P60.75 for LRT 2 and P60.03 for MRT. Sadly, we have not been given a detailed and exact answer (the closest is the rule of thumb that 85 percent of cost in large infrastructure projects is made up of debts) in our several dialogues with them. Even the documents that have been given us do not provide the answer. Thus, we have only made assumptions on what comprises the full cost fare (for instance, read here and here) based on data made available to us by the authorities.

The full cost fare is one issue that we hope to finally get a detailed answer from the LRTA and DOTC in the public consultation on the LRT and MRT fare hike today (February 4) and tomorrow. (Bayan and other groups are participating in the consultation. You may download Bayan’s position paper, which will be submitted to the LRTA during the consultation, here.) If you’re wondering why this is so important, it’s because the crux of government’s argument for a fare hike is that they could no longer continue “subsidizing” the gap between the current fare and the supposed full cost fare.

The latest batch of documents that we were able to get from the LRTA yesterday through its corporate secretary Atty. Hernando Cabrera still does not give the answer despite our very specific request. The documents include, among others, the breakdown of subsidies that the LRTA received from the national government from 2006 up to the approved amounts for 2011. These subsidies total P12.85 billion but are for expansion projects and, I assume, not the subsidies that the LRTA and DOTC refer to when they computed the full cost fare. Or I might be wrong. And if this is the case, transport officials will have more explaining to do – why will they charge to the commuters the cost of expansion projects? Anyway, this also shall be brought up during the consultation. (See Table 1) 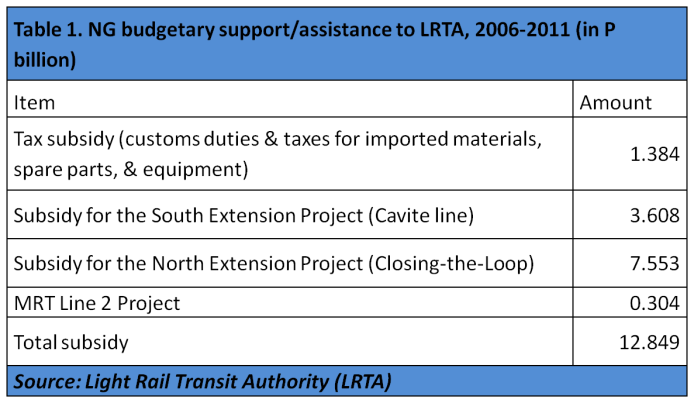 Another is the income statement of the LRTA from 2006 to November 2010 (the 2009 and 2010 figures are unaudited). The income statement supports our contention that what the Aquino administration wants to pass on to the commuters is the debt burden of the LRT and MRT and not simply the shortfall in the costs of maintaining and operating the trains. For instance, the total rail (from passenger fares) and non-rail (from rental, advertising, etc) revenues of the LRTA from January to November 2010 is P462 million more than what it spent for operation and maintenance (O&M). Revenues from passenger fares alone are P272 million higher than O&M. (See Table 2) 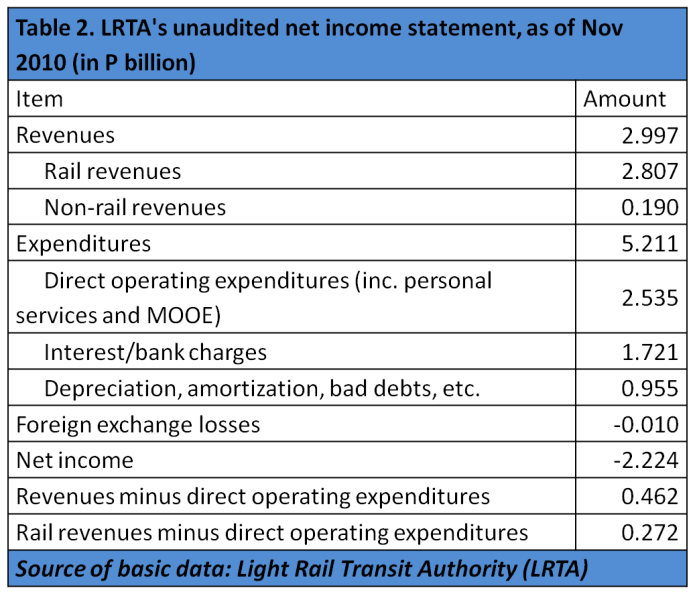 Interest payments and bank charges, on the other hand, reached P1.72 billion during the said period. Amortization, bad debts, and others added another P955.32 million to the expenses of the LRTA. These expenses offset the rail and non-rail revenues resulting in net losses for the LRTA of some P2.22 billion. But as I have repeatedly argued, these are not actually losses in the business sense but public investment. They are loans that government borrowed in order to enable the economy and the people achieve new or additional capability. Servicing these debts should be done through taxes (and if they’re onerous like in the case of MRT, should be renegotiated) and not through higher user fees which what government plans to do. Servicing these debts through higher user fees will cancel out the social and economic gains that the LRT and MRT create.

Meanwhile, it seems that the fare hike, which could reach as much as 100 percent, and the President’s offer to guarantee so-called regulatory risks for major public-private partnership (PPP) projects have succeeded in stoking investor appetite in LRT and MRT privatization. Just three days ago, news came out that the Metro Pacific Investments Corp. (MPIC) of Manny Pangilinan has already formally written Finance Secretary Cesar Purisima offering to buy government’s 71 percent stake in MRT for $1.1 billion. MPIC already controls 29 percent of MRT which it bought from Fil-Estate Corp.

Pangilinan’s bid is indeed tempting for the cash-strapped Aquino administration since the offer is reportedly enough to settle government’s outstanding debt in MRT. But it is bad news for the commuters who will ultimately shoulder this debt through even more exorbitant fares in the future.

MPIC itself reportedly said in its letter to Purisima that fares could go up to as high as P100 if government will bundle MRT and LRT 1 for privatization because the investor will have to pass on the cost of servicing the lines’ debt obligations of about $2.6 billion to the commuters.