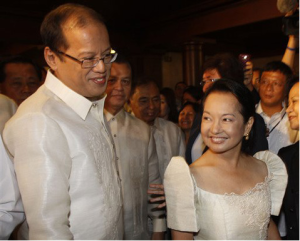 Aquino should not use Arroyo’s corruption to conceal the inadequacies of his own policies and vision (Photo from mabuhaycity.com)

On Monday (July 26), President Benigno Aquino III will give his first State of the Nation Address (SONA). His speech before Congress is highly anticipated as people look for signals that the country will indeed chart a new direction in the next six years, one that breaks from the old path of poverty, backwardness, oppression, and exploitation.

But Aquino’s spokesperson told the media that his first SONA will be some sort of an exposé on “irregularities in the previous administration that were uncovered by the new Cabinet”. (Read here)

Filipinos, however, are more interested to hear what Aquino plans to do to immediately change the country’s course. It’s not that they do no want to know the real state of the nation. It’s just that they are already very much aware of the mess left behind and crimes committed by the Arroyo administration.

Obviously, no amount of legacy propaganda was able to conceal the corruption and abuses of Gloria Arroyo and her minions and the unprecedented political and economic crisis that the country is mired in today. Proof of this is Arroyo’s negative 17 percent net satisfaction rating in her last month as President and that she has been “steadily unpopular in the last six years”. (Read here)

Instead of an exposé, the SONA must describe how the Truth Commission will make Arroyo and others accountable. Aquino must provide indicators to measure the success of this commission such as specific targets and specific deadlines.

In other words, the SONA must answer the question “where do we go from here and how do we get there?” Aquino said he wants to take us to the daang matuwid and he will take us there without the presidential wang-wang. That is not enough.

Aside from bureaucratic corruption, there are other chronic problems that Aquino will have to take up in his SONA. Job scarcity, poverty and inequities in wealth distribution; insecurity in resources like energy, water, and food; fiscal deficit; agrarian unrest; human rights violations; climate crisis and environmental destruction; and erosion of national sovereignty to name a few are at unprecedented levels.

These are paradigmatic issues that are not answered by anti-corruption rhetoric. Unfortunately, we have yet to hear an unmistakable pronouncement that the failed policy frameworks of the past such as liberalization, deregulation, privatization, export-oriented, foreign investment-led development, etc. will be reviewed, much less abandoned, by the new government.

In his SONA, Aquino should not use Arroyo’s corruption to conceal the inadequacies of his own policies and vision for the country.

He must be challenged relentlessly to act on the people’s immediate and long-term demands for genuine reforms. (Read the People’s Challenge here)

3 thoughts on “Noynoy’s SONA and the People’s Challenge”