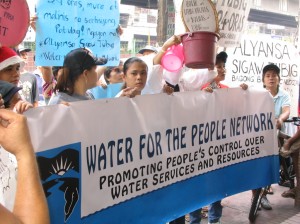 "Water for the people now!"

Unknown to most Filipinos, today (March 22) is the international observance of the World Water Day. This initiative grew out of the 1992 United Nations Conference on Environment and Development (UNCED) better known as the Earth Summit held in Rio Janeiro, Brazil.

For this year, the theme is “Clean Water for a Healthy World”, with a campaign, said the UN, “to raise the profile of water quality at the political level so that water quality considerations are made alongside those of water quantity”.

According to the World Health Organization (WHO), water, together with sanitation and hygiene, have important impacts on both health and disease. In a 2008 report, the WHO noted grim facts on the health situation in relation to access to water, to wit:

Meanwhile, a more recent (2010) report by the WHO and the United Nations  Children’s Fund (Unicef) noted disparities between countries, regions, and urban and rural areas in terms of access to sanitation:

Such appalling global reality is reflected in the Philippines where the poor have been increasingly deprived of access to water for basic domestic use due to neoliberal policies such as privatization of water services and resources. The situation continues to deteriorate today due to the El Niño that has further limited water supply available for the people, especially the poor.

According to the 2007 Annual Poverty Indicator Survey (APIS) of the National Statistics Office (NSO):

The advocacy group Water for the People Network (WPN) intends to draw public attention to this situation of lack of access to water for basic domestic use and for people’s livelihood amid the El Niño and continuing privatization of the country’s water resources.

Tomorrow, March 23, the WPN will hold a roundtable discussion on Angat Dam’s privatization together with the Commission on Human Rights (CHR) and other stakeholders including farmers from Bulacan, consumers as well as water agencies including the Metropolitan Waterworks and Sewerage System (MWSS).

More on the Angat Dam privatization and the WPN’s roundtable later.